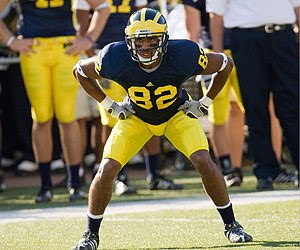 Savoy was the #30 receiver in the Rivals class of 2005. That seems . . . high in retrospect. Savoy has had off-field problems during his college career. He’s also struggled on the field. He started one game in 2008 and earned significant playing time in several other games, but he only caught four balls.

The most telling play I’ve seen from Savoy came in a game (which one, I can’t remember) last year. Savoy was wide open down the right sideline and the quarterback floated a perfect pass over Savoy’s outside shoulder. Savoy turned around awkwardly and promptly ran out of bounds before catching the pass. It was honestly the most awkward adjustment to a ball I’ve ever seen from a player at such a high level. The way he finished his route was the way I expect my high school linemen to adjust to passes I throw them during water breaks.

With Hemingway returning from injury, don’t expect to see Savoy on the field very much. He’s supposedly one of the best blocking receivers on the team, but that won’t make up for his lack of athleticism and poor hands. Hopefully, he can find a niche on special teams for his fifth and final year at Michigan.