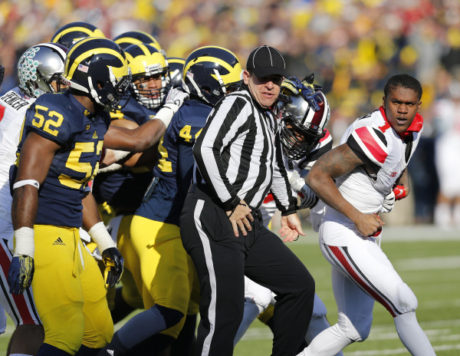 Jenkins-Stone’s biggest impact last season was when he initiated a minor brawl against Ohio State, for which he was booted out of the game (along with Buckeyes Marcus Hall and Dontre Wilson). It was a somewhat ugly incident, and despite inciting it by ripping off Wilson’s helmet during a routine tackle, Ohio State came out looking worse after Wilson threw a punch and Hall flipped off the crowd on his way to the tunnel. Either way, the other parts of Jenkins-Stone’s 2013 season were pretty forgettable. He couldn’t pierce the rotation at linebacker, and he made fewer special teams tackles than a wide receiver (Jehu Chesson) and a fullback (Sione Houma).

This year brings a modified defense, the 4-3 Over, and some new hope for Jenkins-Stone. Recruited as a middle linebacker, he’s too light at 221 lbs. to be the thumper in the middle that was expected of him. Instead, he’s a special teamer who has shown an ability to slash downhill but not much else. While I normally wouldn’t expect much of a guy who has essentially only contributed on special teams, I am making an exception for him. I have never viewed him as a read-and-react guy, so his new position as a SAM linebacker in the Over fits well – he should be able to blitz from that position and play downhill if flow comes his way. There were some rumblings in the spring that he had leapfrogged incumbent starter James Ross III (who bumped over from WILL in the shakeup), but I find it hard to believe that last year’s second-leading tackler will lose his job to a special teamer with 11 career stops. However, I like how Jenkins-Stone fits at SAM, and I think he will get a fair amount of playing time on the defensive side of the ball, not just on specials.