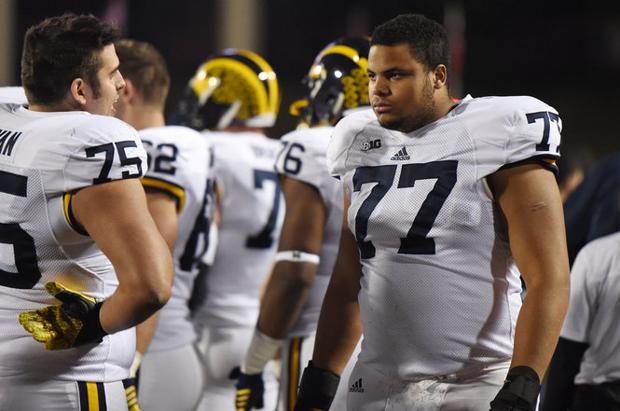 Newsome entered last season looking like he would redshirt. He was listed at just 280 lbs., and Michigan had a veteran offensive line with some older backups. Logan Tuley-Tillman was the backup left tackle and probably the sixth-best lineman . . . but then he got into legal trouble. Michigan tried Tom Strobel on the offensive line, too, but eventually he was needed on the defensive line after a couple injuries. Newsome then stepped in to be the sixth lineman who would play in certain packages. He did okay, and clearly he had potential, but he didn’t look ready for prime time just then.

With Mason Cole’s move to center in the off-season, the most natural fit was for Newsome to slide in at left tackle. The coaches burned his redshirt last season because they thought he had a good chance to be a starter this year, and he was the #1 guy this spring. I think Newsome has some ability to drive block, and I think he has the feet to be a blindside protector, but he looked raw in pass protection this spring. He tends to get overextended and plant his feet in pass protection, so it should be interesting seeing how far he has come since we saw him in early spring. On the plus side, he was listed at 280 lbs. last year and now checks in at 318 lbs., so that’s a gain of 38 lbs. in the span of about a year. The guy is huge. I imagine there will be some growing pains early in the season, but judging from what I saw last year, I think Newsome should make progress by week four or week six. The coaching staff does a good job of selecting and developing players, so I’m looking forward to seeing what type of player he will be in the second half of this year, as well as in 2017 and 2018. If he goes down this year, Michigan could turn to freshman Ben Bredeson or flip Erik Magnuson over from the right side. Since Newsome is so inexperienced himself and somewhat raw, I don’t think that would be too devastating.