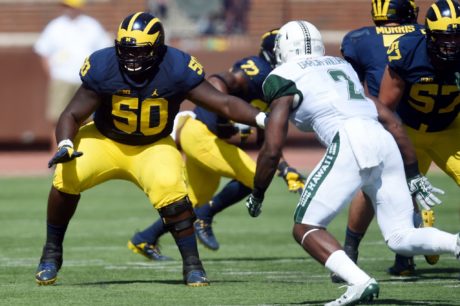 Thanks to Eric for the Paypal donation! As a reminder, you too can help support this here blog by clicking on the Paypal button on the right sidebar.

In most years, take an overweight offensive guard as a true freshman, and you can slap a redshirt on him. Not for Michigan in 2016, though. Michigan’s coaching staff knew they were losing three seniors to graduation after the season (OG/OT Ben Braden, OG Kyle Kalis, and OT Erik Magnuson), and maybe they knew in their hearts that David Dawson wouldn’t be able to hack it in the program. That’s four offensive linemen gone from last year’s mediocre crew, not to mention that Patrick Kugler was a candidate to depart, too. Some seasoning was necessary. So they threw in Onwenu at offensive guard. And nose tackle. And on the field goal unit.

This year he will play a little less nose tackle and a lot more offensive guard. Onwenu is slated to take over Kyle Kalis’s right guard spot. Reviews have been mixed, however. Onwenu has always moved well for a big man (he was up around 370 lbs. for a while), but the caveat “for a big man” is necessary. He can get going in a straight line, but his lateral quickness can be an issue. That becomes apparent at times in pass protection and when trying to reach the second level. On the flip side, if he gets his hand on a defender, that defender turns into that poor little opossum you see on your way to work in the morning. Rumor has it that the coaching staff gave Onwenu some tough love and put him on a weight loss plan, and now Onwenu is down in the 350 lb. range. Hopefully that’s light enough to where he can last a whole game without getting too exhausted to play effectively.