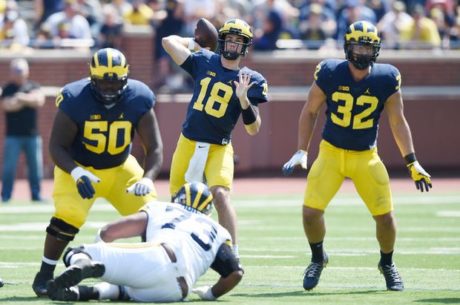 Michigan fans have been desperate for a pro-level quarterback recruit for several years, and that guy finally came in 2016. Some expected an immediate push for playing time, but that was unlikely for a player who played against merely solid competition in high school and didn’t have individual QB training. There was a steep learning curve for Peters, and there were even rumors that he was a bit homesick and considering going back closer to home. The biggest knock on him throughout last season and the spring was a lack of command, for the offense for the team.

Some of those issues still exist, and news came out recently that returning starter Wilton Speight and fifth year senior John O’Korn have separated themselves from the rest of the quarterbacks during fall camp. That comes after a spring in which Peters often looked like the most talented QB on the roster, including in the spring game. I still believe Peters is the more valuable backup puzzle piece, because Michigan needs to groom him for 2017 and beyond. O’Korn will graduate after this season, and he might be the guy who steps in if something happens to Speight. But I think Peters can do a good job, and he needs game experience. The coaching staff needs to get him on the field and see what they have. I have a hard time picturing Peters overtaking Speight either this season or next, but there’s a chance that Speight enters the NFL early or suffers further injury to his shoulder, and Michigan needs to prepare for that possibility.