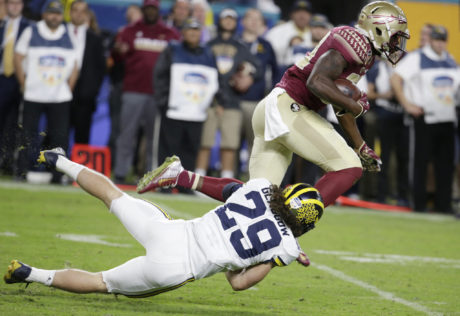 Before the spring game of 2017, you probably knew two things about Jordan Glasgow. One, he’s the youngest of the Glasgow brothers, all of whom walked on to Michigan’s program and got drafted so far. Two, he was the dude who missed the tackle on Florida State’s kickoff returner, Keith Gavin, in the Orange Bowl. The latter is probably the most embarrassing moment of the youngest Glasgow’s whole football career, because there’s a very good chance that Michigan would have won the bowl game and been 11-2 to end the season.

Surely he wants to give people something else to remember. Of course, this didn’t erase the Orange Bowl gaffe, but he did make an endzone interception in the spring game and return it 103 yards for a touchdown against a Wilton Speight-led offense. He also made 2 tackles and 1 pass breakup on defense in the spring game. He probably won’t start this fall unless injuries occur, but right now he appears to be a primary backup to Viper Khaleke Hudson and strong safety Joshua Metellus. He should get a fair amount of playing time, and maybe he can make something happen in game action to forget his most embarrassing moment.