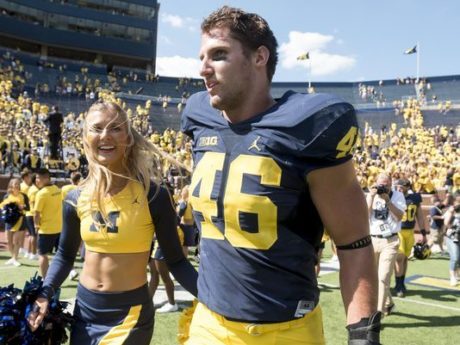 Wroblewski was mostly an afterthought for me going into last season, with his biggest contribution being a slow-moving culprit on a few chunk plays in the 2016 spring game. Michigan moved him from a practice squad defensive end to what seemed like a practice squad-level inside linebacker. Things didn’t look promising, but he still made his way into several games and made a handful of tackles.

This spring the coaches insisted he had taken steps forward. According to Don Brown, Wroblewski knows the defense inside and out, and he can make the calls for the entire defense. Naturally, that translates to identifying opposing personnel and formations, as well as making quick reads. We saw some of that this spring when Wroblewski made some plays in the run game, but he’s more of a two-down MIKE linebacker with little upside. Michigan supposedly has a trustworthy trio of inside ‘backers with Wroblewski, Devin Bush, Jr., and Mike McCray II, but it would be ideal if one of three highly touted freshman linebackers stepped up to play more snaps. The question is whether they’re ready, but they still might benefit from having the senior leadership of Wroblewski (and McCray). It’s good to have an experienced, smart leader in the film room and on the practice field. I expect Wroblewski to play more than he did last year, but I also expect one of the freshmen to take more and more of his snaps as the season progresses.