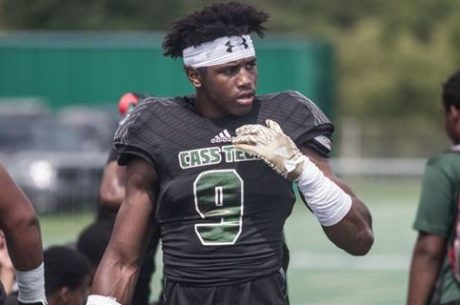 Peoples-Jones was perhaps the jewel of the 2017 class, as he was the most highly sought recruit in the State of Michigan, and one of the best in the country. He had the highest SPARQ score as an underclassman in the summer of 2016, and everyone raves about his speed and athleticism. Toss in the fact that he’s academics-oriented and wants to go to medical school someday, and Michigan seems to have pulled in a pretty solid all-around guy. He ended up playing in the U.S. Army All-American Bowl before enrolling early at Michigan.

Now Donovan Peoples-Jones is going to wear the #9 at Michigan. This is noteworthy, because he yoinked it from junior Grant Perry. (Perry may have yoinked it from himself with his alleged felonious behavior in East Lansing, but we’ll kind of ignore that for the purposes of this post.) Peoples-Jones impressed in the spring, though he doesn’t seem to have an otherworldly grasp on the game to the point where he’s going to be an immediate star in college. That’s a difficult task for almost anyone, but especially in a pro-style offense with lots of adjustments and virtually no emphasis on tempo. Kekoa Crawford will likely start at one receiver spot, so it seems to be a race between Peoples-Jones and fellow freshman Tarik Black for the open wideout position. My take based on practice rumblings and what I saw in the spring game is that Black might have the edge for now, but I think Peoples-Jones has the higher ceiling in the long run. Either way, both should play a considerable amount, but neither is destined for an all-conference year here in 2017.