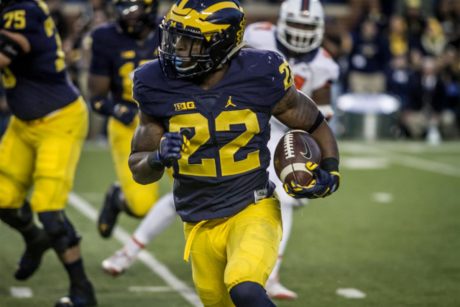 Higdon was not very productive in limited time as a true freshman (1.7 YPC), so his 2016 season could be considered a bit of a breakout. He averaged 5.9 yards/carry and moved up the depth chart to #3, behind De’Veon Smith and Chris Evans. He had his first career 100-yard game against Rutgers (108 yards, 2 TDs), and followed that up with a 106-yard effort (1 TD) against Illinois the following week. In fact, in a string of three consecutive games in which he participated, he totaled 295 rushing yards and 5 touchdowns, with that third game coming against Penn State. Unfortunately, his production dropped off during the second half of the season, when he averaged just 2.2 yards/carry over the final six contests.

There have been rumblings that he was not 100% healthy going into the 2016 season, and maybe that explains the fact that he was lingering below 190 lbs. He showed an improved burst in 2016, but he still needs to break more tackles. With Smith graduated and Drake Johnson out of the picture, the depth chart seems to have cleared up a little bit and now it seems likely that Higdon will be the #2 guy going into the season. With Chris Evans slotted to be the starter, Higdon will be the second back in at times (with Ty Isaac likely rotating in regularly, too). If the offensive line can open holes for the running game, then Higdon has enough burst to make some chunk plays.