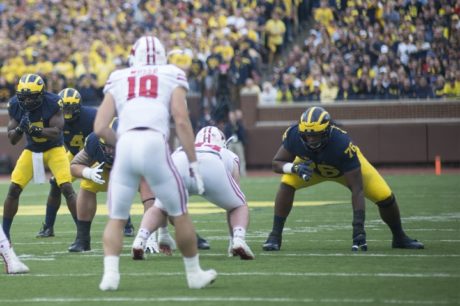 Bushell-Beatty went into the 2016 season with a prime opportunity to win a starting position, and he lost out in that competition to Grant Newsome to begin the year. Furthermore, he appeared to be third, behind freshman Ben Bredeson as well. Bredeson went on to establish himself at left guard, but Bushell-Beatty drew into the lineup after Newsome suffered a horrific knee injury against Wisconsin. (Newsome missed the rest of 2016 and will also miss 2017.) Bushell-Beatty struggled but earned his first start the next week against his home-state Rutgers Scarlet Knights . . . and struggled some more, at which point he was permanently replaced by Ben Braden.

This spring wasn’t any more positive for Bushell-Beatty. On the plus side, he has lost some weight from his earlier days in a Michigan uniform, but some minor injuries hampered him and he was passed by 6’4″ Jon Runyan, Jr., a guy almost everyone pegged as a center or guard. Some reinforcements are enrolled for the fall, though the Wolverines were unable to snag any grad transfer offensive linemen to ramp up the competition. Bushell-Beatty appears to be in a backup role for 2017, and while he has some value as a seasoned backup, he probably won’t be a starter again at Michigan unless injuries occur. Perhaps new offensive tackles coach Greg Frey can work some magic, but Frey generally goes for different body types than Bushell-Beatty’s. Ultimately, it looks like Bushell-Beatty will be a backup in 2017 and perhaps looking for a grad transfer opportunity elsewhere in 2018.