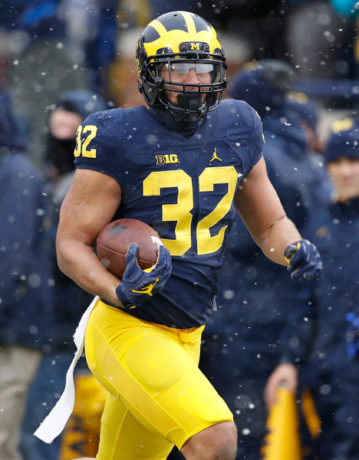 Coming off a 2015 season where he averaged 6.8 yards/carry and broke off a 76-yard touchdown run, I thought Isaac should take a step forward on the depth chart. But that doesn’t mean I thought it would happen. The coaching staff did not appear to be as enamored with Isaac as I am, and while he did get more attempts, he was still not relied upon heavily in crunch time. Despite averaging 5.6 yards/carry, he had just 11 carries in the final six games – including the bowl game, in which he did not play for an undisclosed reason. Meanwhile, Karan Higdon had 29 carries for 66 yards over that same stretch, which is a little more than 2 yards/carry. Isaac’s yards per carry in that time? He ran for 85 yards, almost 8 yards/carry.

So. I know nothing. It doesn’t make sense unless former running backs coach Tyrone Wheatley and/or other guys on the coaching staff didn’t like Isaac, for whatever reason. I’m a numbers guy, and the numbers don’t support the playing time decisions.

It happened again in the spring game, to a lesser extent. Isaac (5 carries, 47 yards, 9.4 yards/carry, 1 TD) got fewer carries than Higdon (12 carries, 81 yards, 6.8 yards/carry, 2 TDs). I’ve learned over the years not to put too much stock in running back carries in the spring game (look out for Wyatt Shallman, everyone!), but I have resigned myself to the idea that Isaac is a backup. The coaches have their eyes on Chris Evans – who admittedly seems to be a more productive back – and Higdon, and they might even see Kareem Walker as a guy worth getting more carries. Wheatley has departed for the Jacksonville Jaguars, and in his place is former tight ends coach Jay Harbaugh, so a fresh start may be a good thing. I like Isaac and think he might be very underutilized, but there’s nothing I can do about it from my computer.