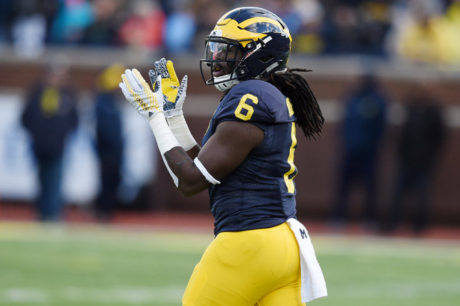 Walker had an inauspicious beginning to his college career. After enrolling early in January of 2016, he had some off-the-field and academic issues that ensured his redshirt. In fact, there were even some rumors popping up that he might be on his way out of the program.

On the plus side, he supposedly got on track this year and took some steps forward. He played in the spring game, and while he looked a bit quicker and slimmer than he did in 2016, he didn’t do much in the game. Some people were impressed. I shrugged my shoulders. I have heard various reports since the spring that he was either #2 or #4 on the depth chart, and that was before freshmen O’Maury Samuels and Kurt Taylor arrived on campus. My take is that he will be the #4 guy on the roster, but he might look like #3 at times. With Chris Evans looking like the starter and Karan Higdon as #2 or #3, it’s a matter of whether Michigan wants a more proven back (Ty Isaac) or a guy they can groom for the future (Walker). Isaac is in his final season, and without an opportunity to start in 2018, Walker might be the better guy to play at times. I think Isaac is a superior back right now, but that doesn’t always strictly play out on the field.