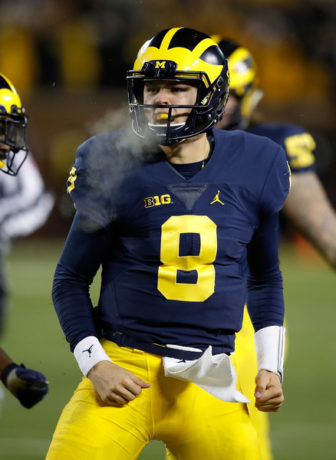 Allow myself to quote myself:

That’s from last year’s countdown, and it sums up O’Korn’s role pretty well. Of course, he never won the starting job outright, but he came in handy when Speight injured his shoulder and had to miss the Indiana game. Based on what else we saw from Shane Morris throughout his career, Morris would have lost that game. O’Korn didn’t play well (7/16 for 59 yards), but a 30-yard run late in the game sparked the Wolverines to a victory. Otherwise, he played well in mop-up duty, but that one start – in the snow and swirling wind – was very shaky.

This year it looks like O’Korn will drop to third string. Redshirt freshman Brandon Peters appeared to pass up O’Korn by the spring, and Peters is even pushing Speight. O’Korn still has some decent physical skills when it comes to running ability and arm strength, but his struggles seem to have been mental. Speight struggled in the spring, and some think he’s still suffering from his collarbone injury; Peters is young and prone to some up-and-down play. I don’t think the combination of Speight and Peters will play poorly enough to give O’Korn a shot at starting unless a significant injury occurs, but the Wolverines did throw Morris out there in certain packages and gave him some snaps late in decisive victories. This might not be the end to a career that many of us imagined when we found out O’Korn was transferring from Houston a couple years ago, but it looks like he’ll finish out college as a backup. But from Michigan’s perspective, they’re in pretty dang good shape if their third-stringer has 1.5 seasons of starting experience.