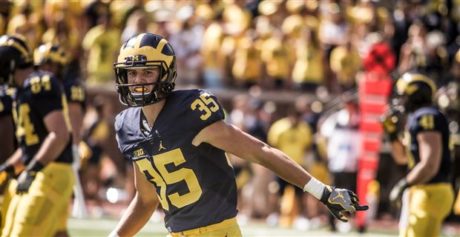 Schoenle was a bit of a revelation this spring. Not only did he play a skill position as a true freshman walk-on in 2016, but he was a reliable receiving threat in the spring game. That capped a behind-the-scenes batch of positive rumors regarding his practice performances. Schoenle is a steady route runner with decent speed, and he seems to have the trust of Michigan’s quarterbacks. Michigan is looking for someone in the slot to potentially take the spot of Grant Perry, who has had some off-the-field troubles, and Schoenle is vying for that spot. He’s not a jet sweep threat like Eddie McDoom, and he’s not a threat to take it to the house on a bubble screen, but he’s a good enough route runner to get separation in the slot, and he’s a big enough target to be a matchup issue for tiny nickel corners. In reality, he might outplay this ranking, or this might be too high for him, but his star seems to be rising a bit.