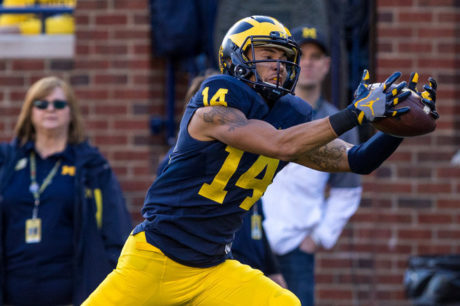 There was a lot of hype for Harris in the 2015-2016 off-season. A long, tall, speedy wide receiver who used to be an elite basketball recruit? It was about time that he hit his stride. But instead of capitalizing on all those skills when he finally seemed to be healthy, he made 2 receptions for 11 yards. Meanwhile, the two wideouts ahead of him got drafted to the NFL, and the guys expected to replace them are . . . not Drake Harris.

No, Drake Harris won’t replace Jehu Chesson and Amara Darboh, because Harris is now a cornerback. He and Jim Harbaugh decided to make the position switch this summer after spring practice had concluded. One reason is that cornerback needs depth and competition, and another reason is likely that Harris just wasn’t getting it done at receiver. On 8 career catches, Harris has a paltry 6.2 yards per reception. Of course, he has never played defense before, so that could be an adventure itself.

Michigan’s staff has had success with tall corners and position-switchers in the past (Jeremy Clark from S to CB, Richard Sherman from WR to CB), but Harris’s injury history and the suddenness of this switch seems not to bode very well for this fall. I do think he could make some contributions simply because of his size, and this is a year where Michigan might need to throw a bunch of corners out there and give them all a chance to move to the front of the pack. The Wolverines lost their top three corners from last season; Harris, David Long, and Lavert Hill have all had injury issues; and the door to a starting job seems to be wide open. I don’t think Harris will start, but anything could happen with this group.