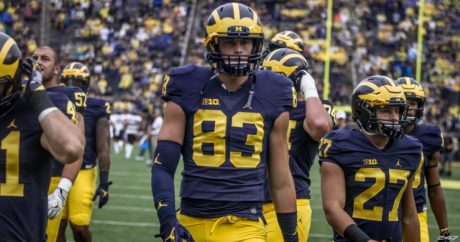 Gentry has had an interesting career in just two years on campus. Brought in as a blue-chip quarterback, he struggled with the offense and began taking snaps as a tight end during the bowl preparation at the end of the 2015 season. He then struggled with blocking at the tight end position, so he spent the second half of the 2016 season taking reps at wide receiver. This spring Michigan was down a couple tight ends from last year, and Gentry was back at tight end.

Gentry still struggles with blocking, despite the fact that he’s listed at 244 lbs. Honestly, he’s terrible at blocking as an in-line tight end. He’s not aggressive, and he’s slow to get off the ball. I would be surprised if Michigan uses him in that role at all this season. However, he is a unique specimen as a receiving prospect, and he has shown that ability on multiple occasions. His most exciting play was a long catch-and-run touchdown in the spring game; it was a busted coverage, but he made a (walk-on) defender miss in space and then sprinted to the endzone. The ability is obvious. Whether Michigan uses that athletic ability or not remains to be seen, but it’s there. I think the idea of a matchup problem is overused, but a guy who’s 6’7″ and can run like Gentry is a rarity.