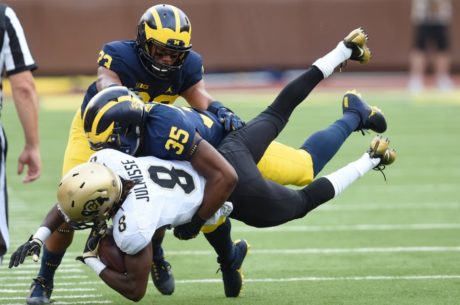 Uche entered last season as a linebacker/defensive end tweener, and his deployment in 2016 saw him playing linebacker almost exclusively. I was skeptical of that move coming into last season, because he was primarily a rush end at Miami (FL) Columbus. He didn’t do anything special and made a couple gaffes, which would be expected for a true freshman playing a relatively new position.

When Don Brown was talking to media members this spring, he said Michigan was going to do some special things with Uche. And when Don Brown says “special things,” I figure he plans to blitz Uche a ton when he’s out there, and that’s his specialty. Michigan lost some good pass rushers in the off-season, and a couple of their best rush guys (Chase Winovich, Maurice Hurst Jr.) may get worn down by increased roles this season. Uche might be a guy who can offer some pass rush in obvious throwing situations. The Wolverines might use Khaleke Hudson as a Viper instead of throwing the SAM linebacker out there a ton, but if Michigan goes to a three-man front or wants to sub out a linebacker, I expect to see Uche.