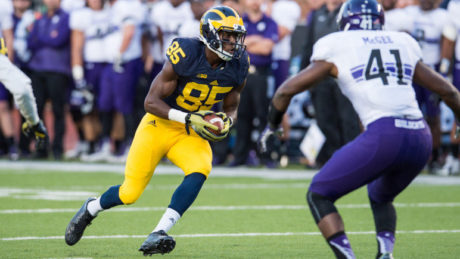 Last year there was a fair amount of hype for Ways coming out of spring ball. The coaching staff liked him, he was catching the ball consistently, he’s always been a solid blocker, and he’s a high-character kid. Things seemed to be shaping up for a pretty solid year, probably as the next guy behind Jehu Chesson and Amara Darboh on the outside. Then a foot injury happened. He played in just six games, and he only caught 2 passes.

Going into his fourth year in the program, it’s another now-or-never situation. Michigan has a batch of young players who are superior when it comes to speed and athleticism, and if they’re starting from roughly the same overall talent, coaches are going to lean toward developing the younger players. One place freshmen typically struggle is in the area of blocking, and that’s where Ways will probably have to make hay if he wants to see the field. The Wolverines lost both starters from last year, so technically, the outside jobs are up for grabs. Most projections right now seem to have Kekoa Crawford pegged as the top guy outside, and he played more than Ways last year. Otherwise, Drake Harris has moved to defense, and the rest of the contributors were mainly in the slot. Since Ways is strictly an outside guy, he’ll be battling with the likes of Tarik Black, Donovan Peoples-Jones, and Nico Collins for snaps. I don’t think Ways will win that battle, but if he’s healthy, I think he should see an uptick in snaps and play in more than six games.