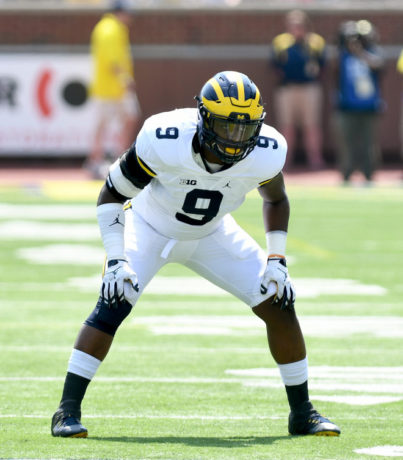 McCray spent a lot of time a) playing special teams and b) being injured prior to 2016, and there was even a question about whether he would be able to continue his football career. A lingering shoulder injury has caused him problems, and he wears a harness over that shoulder to protect him from further injury. So when he solidified himself as Michigan’s starting weakside linebacker last season, there was some trepidation about whether that role would last.

He hit the ground running, though. At 6’4″ and 248 lbs., he’s a very large weakside linebacker, but he was impressive in coverage and on the blitz. Pro Football Focus names him the #3 returning linebacker in the Big Ten, #1 in pass rushing, and #2 in pass coverage (LINK). He struggled occasionally with finishing tackles in space, a problem that I think was overblown at times. Yes, the 6’4″, 248-pounder had trouble corralling scatbacks in open space, which shouldn’t be surprising. That’s like complaining that a 5’7″ cornerback struggles to cover a 6’6″ tight end. It’s his job to do that, but you know ahead of time that’s not his strength and throw him out there, anyway, because he’s good at other stuff.

Recently, McCray was named a captain for the 2017 unit, along with offensive tackle Mason Cole. As the only returning starter from 2016, McCray is looked at as a leader and highly competent player. He could very well be an All-Big Ten performer this year, especially if Wisconsin linebackers keep dropping like flies. Sometimes all-conference accolades are given out as lifetime achievement awards, and if McCray can produce like he did last year – or maybe just a bit better – I wouldn’t be surprised at all to see him earn those honors.