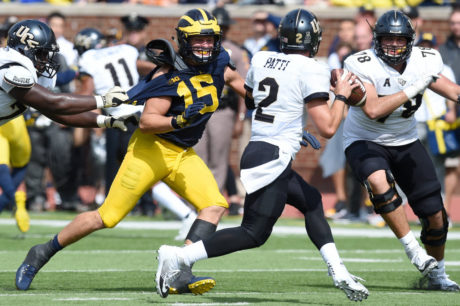 Winovich was an unknown quantity going into 2016 after spending 2014 as a linebacker and 2015 as a fullback/tight end. Jim Harbaugh liked his upside as an offensive player enough to move him to offense, but the high school quarterback didn’t seem to adjust to being a guy without the ball in his hands. But instead of moving back to linebacker, the staff bulked him up and plopped him at weakside end. I could see in the spring of 2016 that he was going to be quick enough and aggressive enough to pester offensive tackles and quarterbacks and be a contributor, and that came true. He backed up Taco Charlton at weakside end and finished the year with the second-most sacks on the team, despite being a backup.

Now that Charlton is with the Dallas Cowboys, Winovich’s spot is written in ink at weakside end. Some solid recruits back him up, but this is Winovich’s job. He should continue where he left off, and I expect an uptick in production now that he has been playing one spot for a second year in a row. He’s a smaller guy, but he plays with leverage and a non-stop motor. I think there’s a fair amount of talent in the Big Ten on the defensive line, but Winovich could be a second team all-conference guy this season.