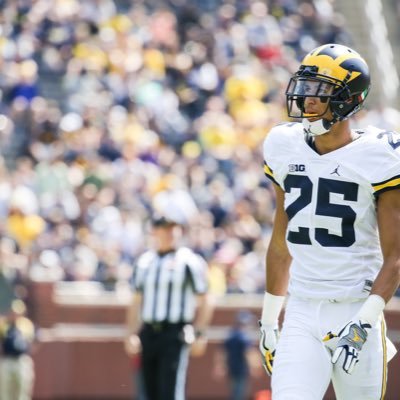 St-Juste had an odd route to Michigan. Originally committed as a part of the 2016 class, he reclassified to 2017. He was a very inexperienced football player and extremely raw when he first popped up onto the scene and committed to Michigan in June of 2015. Many Michigan fans – including me – were unsure why the Wolverines would take a chance on him, even though Michigan offered him after they saw him at a camp in person.

But then came his 2016 season and an early enrollment and the spring game, and maybe we were wrong. Michigan just had a 6’3″, 220 lb. cornerback with a torn ACL get drafted, and maybe Jim Harbaugh knows what he’s doing with big corners.  St-Juste had an okay spring game where he was toasted by fellow freshman Tarik Black for several catches, except St-Juste was right in his hip pocket the whole time and it took some nice throws and catches to complete those passes. The defense needs two brand new starting corners this year, and while St-Juste probably won’t be a starter this year, he could be a depth player who gets groomed for a bigger role as a boundary corner in the next couple years.