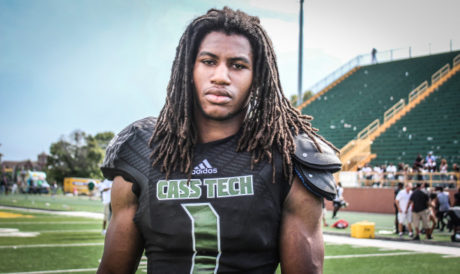 Kelly-Powell was long considered a Michigan lock, but tried to keep everyone in suspense. He bounced back and forth a little bit from safety to corner in high school, but mostly he played a strong safety position. He also played a little bit of running back. He went to The Opening in Oregon and was an Under Armour All-American, but he did not stand out at either event.

As an early enrollee this spring, the word coming out of Schembechler Hall was that Kelly-Powell is a solid player but still very light. He needs to get bigger and would probably be headed for a redshirt if not for a shallow pool of applicants at the safety positions. Michigan’s top three safeties are junior Tyree Kinnel, sophomore Josh Metellus, and redshirt sophomore Jordan Glasgow, and after that, it’s unclear. Kelly-Powell won’t break into that top three, but we’ll see if he’s at #4 or below. I would prefer to see him redshirt, especially since the three guys certain to be ahead of him will still be on the roster in 2018. But I won’t be surprised at all to see Kelly-Powell get some run on special teams or late in decided games.