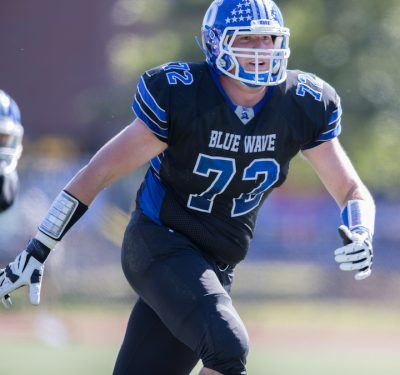 Stueber committed to Michigan almost exactly a year ago, and there were the customary complaints about, “Why are we taking a 3-star? And one from Connecticut?” And while Stueber was indeed a 3-star, and from Connecticut, I’m not too concerned. He’s a big body, he moves well, he bends pretty well, and he’s willing to block downfield. With offensive line recruiting often being a crapshoot, that’s about all you can ask for from a guy.

As for this season, I think Stueber might end up playing, although I don’t think he’ll be an impact guy. Jim Harbaugh isn’t afraid of playing freshmen, and the Wolverines have a need on the offensive line this year. The right tackle position is unsettled, and while Jon Runyan, Jr. might have the inside track right now, he’s not a perfect fit. Other options include freshman Chuck Filiaga and redshirt junior Juwann Bushell-Beatty, both of whom have concerns about whether they’re physically in shape. I’m guessing Stueber won’t ever be a guy who gets sloppy with his body makeup, so if he’s been hitting the weight room in the off-season, he could be one of the top seven or eight guys when September rolls around.