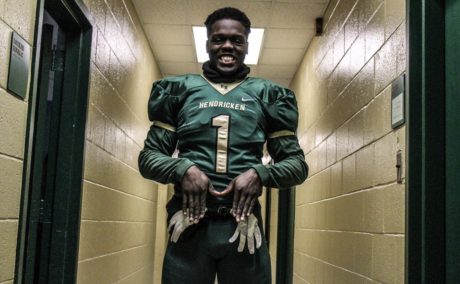 Paye was a standout running back for Bishop Hendricken, maybe more so than he was a defensive player. But he was still good enough to get invited to the Under Armour All-American Game, albeit after a fan vote. Paye didn’t play a ton in the all-star game, but he didn’t play particularly poorly when he got in, either. There’s a lot to like about him with plus athleticism and good size. He’s just pretty raw as a pass rusher, and if his speed rush doesn’t get him a win, he doesn’t have much else in his arsenal.

My rating of him at 81 is probably higher than most expected for a nondescript 3-star, but there’s no denying that Greg Mattison and Don Brown know how to develop defensive linemen and defensive players, in general. If you stick around at Michigan, you generally get to be pretty good. I’m counting on Mattison to take Paye’s running back talent and mold him into a solid player, but it probably won’t happen this year. He’s behind a couple guys, and that probably includes fellow freshman Luiji Vilain. Unless the coaching staff sees some undeniable value in using Paye on special teams, I expect him to redshirt.