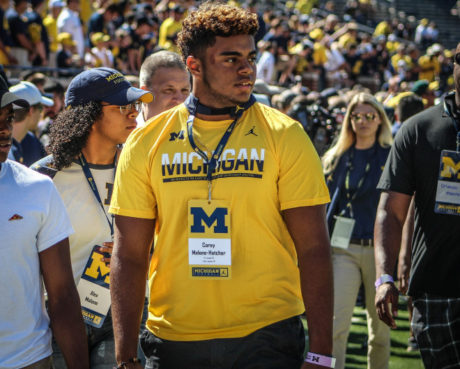 Corey Malone-Hatcher (image via The Wolverine)

Malone-Hatcher injured his ankle (an injury that was rumored to be a torn Achilles) as a junior in high school and missed most of that season. He returned in 2016 to put up some pretty impressive numbers, including playing a high school game at Michigan Stadium at the beginning of the season. Along with playing defensive end, he doubled as a tight end at times.

I ended up giving Malone-Hatcher a TTB Rating of 49. He has reportedly struggled with some aspects of college during his first few months on campus, and I simply think he’s not quite as talented as some other guys Michigan has brought in. Either way, he’s a little undersized and lacked technique, so I think he’s going to redshirt as a true freshman. He may eventually grow into a strongside end, but right now he looks to be behind redshirt junior Chase Winovich and sophomore Carlo Kemp, and I believe Luiji Vilain has a great chance to play early when he arrives on campus this year.