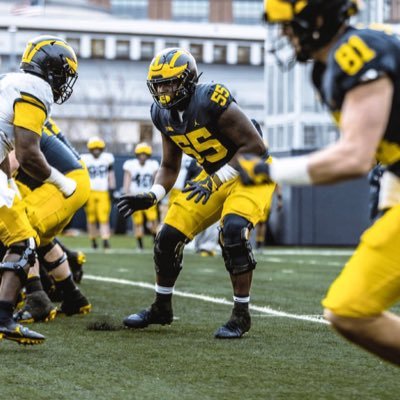 I gave Hudson a TTB Rating of 85 coming out of high school, and that was with the thought that he would play defensive tackle, the position for which he was recruited. I always saw Hudson as more of an offensive tackle, though. While he came in expecting to play defense, it hasn’t taken long for Michigan to switch him to offense.

Lo and behold, the talk all spring and summer has been that Hudson is in a battle to start at left tackle. In one corner, you have fifth year senior Juwann Bushell-Beatty, who started part of the 2017 season at right tackle and did a pretty good job of run blocking (not so much in the passing game). In the other corner, you have redshirt freshman Hudson, who has yet to take a college snap. My metaphorical money is on Bushell-Beatty to start the first game, but he’s been out of shape in his career and he’s not a great athlete. It would be great if he can take a leap as a senior, but I stop expecting a ton of growth going into years four and five. Aside from the two incoming freshmen (Ryan Hayes and perhaps Jalen Mayfield) and the injured Grant Newsome, Hudson is physically the best suited guy to play left tackle. I expect Hudson to start at left tackle for at least a portion of the season.