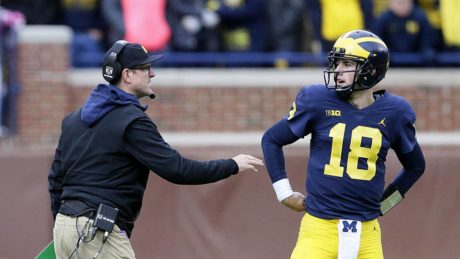 My oh my, how crazy 2017 seems in retrospect. Looking back at the 2017 countdown, it’s odd to think how the quarterback situation seemed to be in such good hands. I never loved Wilton Speight, but he had a solid year of starting experience under his belt, backup John O’Korn had played well in spot duty, and Peters was the young up-and-comer who looked pretty good in the spring game.

Then all hell broke loose.

Speight got hurt, and O’Korn backslid after an amazing performance against Purdue. Peters managed the games well when he entered against Rutgers and then started against Minnesota and Maryland. In fact, he completed 66.7% of his passes in those first two games, and in his first five games of the year, he threw 4 touchdowns and 0 interceptions. Michigan relied on its defense and run game to win all but the Wisconsin game, in which Peters got knocked out (literally). He missed Ohio State week, and he looked shell-shocked against South Carolina in the bowl game, throwing 2 interceptions.

Now Speight is gone to UCLA, O’Korn is probably campaigning to be the top QB taken in the 2019 NFL Draft, and in their place is . . . Shea Patterson, a transfer from Ole Miss.

This spring there were rumors that Dylan McCaffrey had passed Brandon Peters in the pecking order at quarterback, but reports said Peters overtook McCaffrey again by the end of spring. That seems to me to be the right position for those guys at the moment, but Peters obviously doesn’t have a stranglehold on that #2 spot. Everyone expects Patterson to start, and Michigan fans hope he stays healthy. Peters should at least be able to be a game manager again, and hopefully he can be better if he needs to be. I have concerns that he will revert to looking shaken like he did against South Carolina, but I think some people forget that Peters was only a redshirt freshman in 2017. In ye olden days, he either wouldn’t have been on the field, or people would have expected trouble because he was so young. Now we want kids to grow up immediately when they hit a college campus. Hopefully Peters continues to grow and mature on the trajectory we used to expect from quarterbacks in the 1990s.