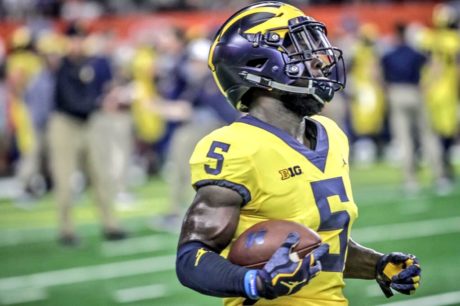 There wasn’t a lot of room for spare carries last season, because Karan Higdon, Chris Evans, and Ty Isaac were all expected to carry the load – and on top of them, there was heralded recruit Kareem Walker. Michigan brought in two running backs in the 2017 class, and while Taylor was bigger and stronger, the scant freshman carries went to O’Maury Samuels, not Taylor.

Now it’s 2018 and there are 108 tailback carries vacated by Isaac (graduated) and Walker (transferred). Where will those carries go? When asked about the tailback position group in the spring, Jim Harbaugh mentioned walk-on running back Tru Wilson at #3. Whether that sticks or not remains to be seen, but Taylor still seems to be an afterthought. Wilson, Samuels, and one of the freshmen will probably get carries, but I don’t see much of the load going in Taylor’s direction. If he can develop into the team’s best pass blocker, then I think he might have a chance to get on the field, but he’s perhaps the least athletic runner in the group.