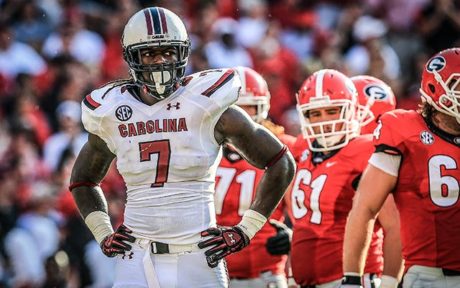 Jadeveon Clowney was the #1 overall prospect in 2011

I’m going to be doing some giveaways/contests on the site to promote the Forum (LINK), so right now there’s a Pick the Score contest going for Wednesday’s basketball game against Minnesota (LINK).

In recent years, Michigan has received commitments from top-ranked running back Derrick Green and cornerback Jabrill Peppers. In response, I posted a look back at the #1 rated tailbacks (LINK) and cornerbacks (LINK). This year Michigan got a commitment from the #1 overall recruit, New Jersey’s Rashan Gary. So below you will find a rundown of #1 recruits going back to the year 2000, which is as far back as the 247 Composite rankings go.

2000: D.J. Williams – LB – Concord (CA) De La Salle; Adam Taliaferro – ATH – Voorhees (NJ) Eastern (tie)
Williams picked the Miami Hurricanes, but with a logjam at linebacker in those days, he spent his first season playing fullback; that year he had 16 carries for 50 yards and 1 TD, along with 12 catches for 143 yards and 1 TD. He started at weakside linebacker as a sophomore in 2001, totaling 51 tackles and 4 TFLs. When he was a junior in 2002, he was a semi-finalist for the Butkus Award and finished the year with 108 tackles, 16 TFLs, and 8 PBUs. Once again a Butkus Award semi-finalist in 2003, he made 82 tackles, 6 sacks, and 2 TDs – one on a 61-yard fake punt run, and another on a 78-yard fumble return. He was a 1st round pick (#17 overall) by the Denver Broncos in 2004 and spent eleven years in the NFL, the final two with the Chicago Bears. His final career stats included 899 tackles, 22.5 sacks, and 2 INTs. In Taliaferro’s case, his statistics are basically irrelevant. Tragically, in his freshman year against Ohio State, the Penn State cornerback broke his neck while making a tackle. After recovering from the injury, he was elected to the New Jersey General Assembly, helped write a book, does some motivational speaking, and runs a foundation for athletes who have suffered head and spinal injuries.

2005: Eugene Monroe – OT – Plainfield (NJ) Plainfield
Monroe was a backup to D’Brickashaw Ferguson at Virginia as a true freshman in 2005. He started six games at left tackle in 2006 after Ferguson went to the NFL. He became a full-time starter at left tackle in 2007. Then as a senior in 2008, he was All-ACC and earned a spot as a 1st round pick (#8 overall) by the Jacksonville Jaguars in the 2009 NFL Draft. After playing four-plus seasons with the Jaguars, he was traded to the Baltimore Ravens in 2013, where he still plays.

2008: Da’Quan Bowers – DE – Bamberg (SC) Bamberg-Erhardt
A part-time starter in 2008, Bowers made 37 tackles, 8 TFLs, and 1 sack for Clemson. He became a starter in 2009 and made 46 tackles, 10.5 TFLs, and 3 sacks. His breakout year came as a junior in 2010 when he made 67 tackles, 26 TFLs, and 15.5 sacks. After that season he was a unanimous All-American and won the Hendricks and Nagurski trophies. Some questions about the health of his knee caused him to drop in the 2011 NFL Draft, going in the 2nd round (#51 overall) to the Tampa Bay Buccaneers. Due to some injury issues and underperformance, he has made 69 tackles and 7 sacks in five seasons with the Buccaneers, with whom he signed a contract extension late last year.

2011: Jadeveon Clowney – DE – Rock Hill (SC) South Pointe
Clowney was an immediate starter for South Carolina and made 36 tackles, 12 TFLs, and 8 sacks as a true freshman. If that didn’t launch him to stardom, a sophomore year that included 54 tackles, 23.5 TFLs, 13 sacks, and 3 forced fumbles did; he was a unanimous All-American and named SEC Defensive Player of the Year. As a junior in 2013, he got a bit of a rap for coasting and finished the season with 40 tackles, 11.5 TFLs, and 3 sacks, but he was still All-ACC and All-America. He was a 1st round pick (#1 overall) by the Houston Texans in 2014. Injuries shortened his rookie year, and he has just 47 tackles and 4.5 sacks through two seasons in the NFL.

2013: Robert Nkemdiche – DE – Loganville (GA) Grayson
Nkemdiche started games at both defensive end and defensive tackle as a freshman at Ole Miss. He made 34 tackles, 8 TFLs, and 2 sacks that first year. A full-time defensive tackle in 2014, he made 35 tackles, 4 TFLs, and 2 sacks. This past season, he made 29 tackles, 7 TFLs, and 3 sacks. Nkemdiche – who played some running back in high school – also moonlighted on offense, rushing 9 times for 34 yards and 2 TDs, along with catching 1 pass for a 31-yard TD in his career. He has had some off-the-field issues, and he declared for the 2016 NFL Draft after his junior year.

In summary, there’s a good chance that Rashan Gary is good at football.