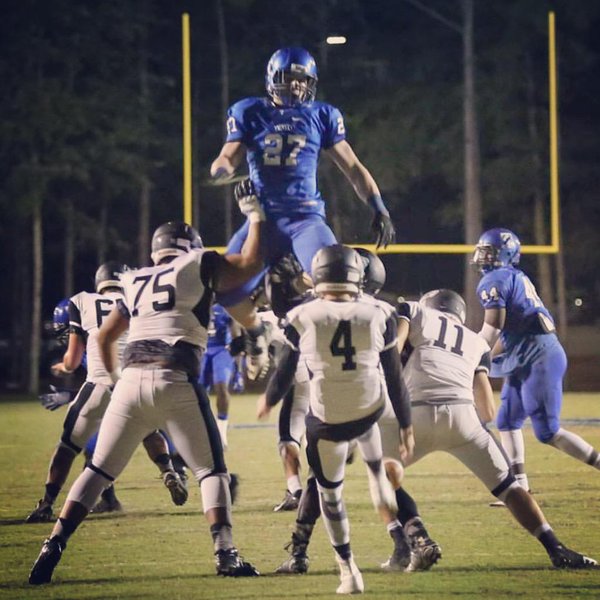 Hit the jump for more on Lasater’s commitment.

Lasater did not report a Michigan offer before arriving in Michigan for the spring game weekend, but it’s not rare for Michigan to wait for prospects to visit before offering. When news of Lasater’s visit appeared several days ago, I was unable to find any news about other scholarship offers. Now he jumped at the chance to play for Michigan. There is some question, however, about what position he will play. He reportedly desires to play linebacker and will get a shot to do so, but Michigan wants him primarily as a fullback. (This sounds a lot like what played out with David Reese II in the 2016 class.)

In Lasater’s film, the thing that sticks out most is his willingness to pretend to be Juggernaut. There are numerous clips of him running full-speed down the field on kickoff coverage and plastering would-be blockers on the gridiron. He has good height – not too tall or too short – and a good frame for a college fullback. As a blocker, he is very strong at the point of attack, maintains pretty good leverage, and moves his feet extremely well through contact. He has good speed in a straight line, whether his forty time is 4.57 or 4.75.

There are few clips of Lasater touching the ball, so that may not be an obvious strength of his. He also does not change direction extremely well. From the linebacker position, there are few clips of him reading and diagnosing plays. The little I see on that side of the ball suggests to me that reading-and-reacting is also not a significant strength.

Overall, Lasater is an interesting prospect as a pure fullback, and less so as a linebacker. He has the mentality to play either position, but Michigan has bigger fish to fry at linebacker. He could be a devastating lead blocker on offense and obviously has some value as a special teamer.

Michigan missed out on filling the fullback position in 2016 and now has lots of uncertainty going forward at the position. The aforementioned Reese ended up flipping to Florida because he a) wanted to play linebacker and b) wasn’t going to be allowed by Michigan to enroll early. Early enrollee Kingston Davis committed as a running back and was adamant about being a runner, not a designated blocker. Right now the Wolverines are counting on walk-ons, a converted tight end, and/or a converted defensive lineman to play fullback. Lasater has a chance to contribute immediately in 2017, which would perhaps allow other players to return to their more natural positions.

The Wolverines now have nine commits in the 2017 class. If Lasater plays fullback, he’s the fourth backfield player, joining QB Dylan McCaffrey, RB A.J. Dillon, and RB Kurt Taylor. If he plays linebacker, he joins Joshua Ross at the position group. He also represents Michigan’s first commit from Florida in the 2017 class after reeling in six Sunshine State players in 2016. He is a teammate of 2016 LB Dominique Ross (North Carolina) and 2017 CB Shaun Wade (Ohio State), both of whom were offered by Michigan.