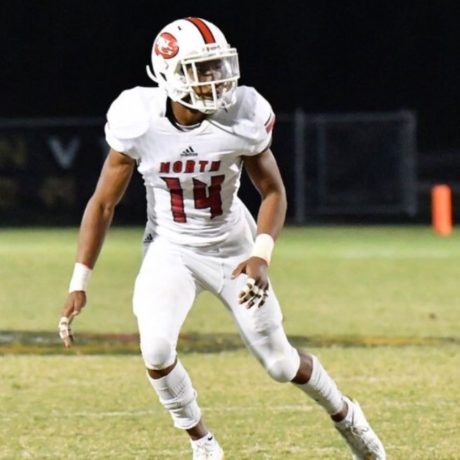 Hit the jump for more on Turner’s commitment.

Turner has been high on Michigan since he visited unofficially prior to his junior year. His quotes have been pro-Michigan for a while, and when he set his announcement date for June 25, it was a foregone conclusion that Michigan would be his choice. After he took an official visit this past weekend, he was one in a long list of players bound to commit to the Wolverines.

Turner has a variety of skills to offer Michigan’s secondary. First of all, North Gwinnett plays him at safety on a team that appears to run a lot of quarters coverage, so there’s a lot of pattern matching and almost man coverage to see from him in his highlights, even though he’s not playing corner. North Gwinnett has a lot of talent in the secondary, but teams will frequently put their best players at safety because opponents have a harder time throwing away from the guys who are in the middle of the field. Turner has the ability to be physical both in coverage and when tackling. He does a good job of reading quarterbacks’ eyes and breaking on balls thrown underneath, where he will try to undercut and/or play the ball at its highest point. He has decent speed but is not a gamebreaker in that area.

Some work will need to be done with Turner’s technique, at least from the safety position. Perhaps he’s more refined at cornerback, but Michigan would not be satisfied with his stance or backpedal. Since he’s playing off the ball quite a bit, we’re unable to see how well he would handle press man coverage. He also needs to work on his change of direction, which is related to the issues mentioned earlier in this paragraph. These are critiques of his technique, which will almost certainly improve once he gets to college.

Overall, Turner is a high-quality corner prospect who should be able to handle the demands of playing physically as a press man corner. He lacks the speed and playmaking ability of some other corners, but his physicality should make up for some of those deficiencies. I see him in a similar vein as David Long in that I would expect him to redshirt or play sparingly as a freshman, and then be capable of stepping in to play during his second year. He’s also capable of playing safety at the next level, at least once he bulks up a little bit.

Michigan now has 15 commitments in the 2019 class. Turner is the first true defensive back, while Joey Velazquez will play a safety/linebacker hybrid role. Turner would be the first football player to come to Michigan from North Gwinnett, which is a talent-rich program.