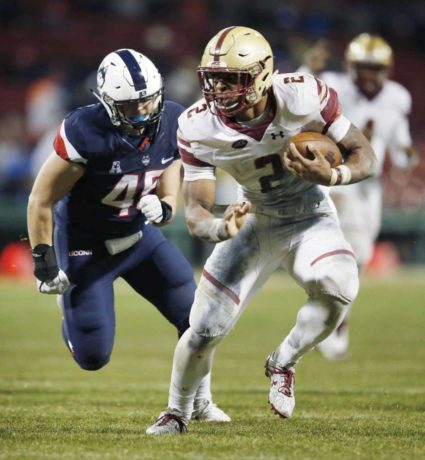 A.J. Dillon (#2, image via The Intelligencer)

Ross Douglas, LB (Rutgers): Douglas made 3 tackles while his team got drubbed 41-0 by Indiana.

George Campbell, WR (Florida State): Campbell is out for the season after suffering complications from the abdominal injury that also ended his 2016 season. He made 6 catches for 122 yards in four games before the re-injury.

Damien Harris, RB (Alabama): Harris had 6 carries for 32 yards in a 56-0 blowout of powerhouse Mercer.

Antwaine Richardson, CB (Maryland): Richardson made 5 tackles and 1 tackle for loss in a 17-7 loss to Michigan State.

Garrett Taylor, S (Penn State): Taylor made 3 tackles in the 56-44 win over the Nebraska Cornhuskers.

Rashad Weaver, DE (Pittsburgh): Weaver made 1 tackle and 1 quarterback hurry in a 20-14 loss to Virginia Tech.

D.J. Durkin, Head Coach (Maryland): Durkin and the Terrapins fell to 4-7 with a 17-7 loss to Michigan State. With just one game left against Penn State, the Terps are looking at a likely 4-8 season with no bowl game.

Jedd Fisch, Head Coach (UCLA): Fisch was elevated to interim head coach at UCLA after the Bruins suffered a 28-23 loss to USC, resulting in the firing of Jim Mora.

Brady Hoke, Head Coach (Tennessee): Hoke is now 0-1 as the head coach at Tennessee after Butch Jones got fired. The Volunteers suffered a 30-10 loss to LSU.

Rich Rodriguez, Head Coach (Arizona): The Wildcats fell to 7-4 with a 48-28 loss to Oregon. Standout quarterback Khalil Tate was held to 32 rushing yards on 14 carries, and even so, he’s averaging almost 150 yards per contest. He also completed 18/35 passes for 159 yards, 1 touchdown, and 2 interceptions.