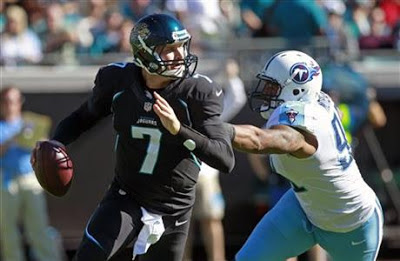 Chad Henne led his team to a 24-19 victory over the Tennessee Titans despite being sacked an unbelievable seven times.  The victory is only the second of the season for Jacksonville, and the win marks Henne’s first start of the season after beating out the tenth overall selection of the 2011 NFL Draft, QB Blaine Gabbert.  Henne went 17/26 passing for 261 yards with two touchdowns and one interception in the win.  Henne’s play has improved greatly since his days in Miami, and his passer rating on the season is now an even 100.  Mike Martin had one tackle in the game for the Titans.

Honorable Mention:  Mario Manningham, Henne’s former go-to wide receiver, had a 40-yard reception in the first half of his 49ers win over the New Orleans Saints.  He finished the game with five receptions for 69 yards.  He now has 36 receptions for 412 yards on the season.