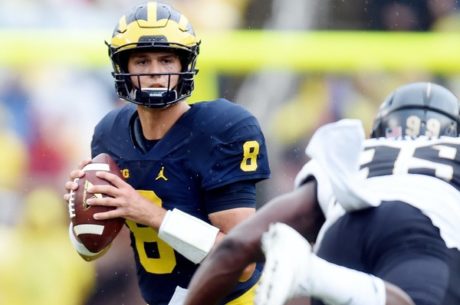 O’Korn, who was originally from Huntingdon (PA) Huntingdon, started five games as a sophomore in high school before moving to play at Ft. Lauderdale (FL) St. Thomas Aquinas. He had 2,552 passing yards, 22 touchdowns, and 4 interceptions as a senior and led Aquinas to a state title; he also ran 95 times for 576 yards and 15 touchdowns. In the state title game, he had 339 passing yards, 95 rushing yards, and 4 total touchdowns. He was a 3-star, the #32 pro-style quarterback, and #645 overall in the 2013 recruiting class and earned offers from Houston, Mississippi State, and Wisconsin, among others.

Hit the jump for more on O’Korn’s career at Michigan.

O’Korn originally attended Houston, where he took over as a true freshman after the starter suffered a career-ending injury. O’Korn started eleven games that year and was named Rookie of the Year in the American Athletic Conference. He set school freshman records with 28 touchdowns and 259 completions. Overall, he completed 58.1% of his passes for 3,117 yards, 28 TDs, and 10 INTs; he also ran 77 times for 104 yards and 1 TD. As the incumbent, he started again in 2014 but struggled and was eventually replaced, finishing 2014 with 52% completions, 6 TDs, and 8 INTs, along with 32 carries for 17 yards and 1 TD. He transferred to Michigan, where he had to sit out the 2015 season as Jake Rudock led the Wolverines. O’Korn lost the battle for the starting gig to Wilton Speight in 2016 and completed 58.8% of his throws for 2 touchdowns in backup duty; he also ran 12 times for 31 yards. In backup duty and filling in for an injured Speight in 2017, O’Korn completed 53.5% of his passes for 2 TDs and 6 INTs, while also running 44 times for -54 yards.

O’Korn had a very solid start to his career at Houston, and it was downhill from there. He got replaced in year two, and things seemed to be looking up in 2015. Not only did he move on to a better program, but he was reportedly playing very well in practice. Some people even reported that if he had been eligible, he would have usurped Jake Rudock as the starter in 2015. With two additional years to watch him, I think it’s far-fetched that he would have beaten out Rudock, who is now a second-stringer in the NFL. Still, hopes were high. He played extremely well in mop-up duty early in the 2016 season, but then struggled mightily against Indiana in his lone start of the season. It turned into a victory, but it took a nice scramble and a career-best game from De’Veon Smith to pull it out. The 2017 season opened with him playing a backup role, but that changed when Wilton Speight suffered a season-ending back injury early in the year. O’Korn came in and was named Big Ten Offensive Player of the Week, and he looked like a new man. After that . . . ugh. He was eventually replaced by Brandon Peters, who suffered his own injury and saw O’Korn take over for the final 1.5 games of the regular season.

I actually think O’Korn looked like a very good athlete at the quarterback position, one of the best Michigan has had in the last 20+ years. Obviously, he’s not on par with Denard Robinson or Devin Gardner as a pure athlete, but his combination of mobility, balance, toughness, and throwing ability were on par with the likes of Drew Henson, in my opinion. However, significant differences obviously exist in the area of confidence, as well as simply the talent surrounding the two players. O’Korn had the physical skills to be a very good player, but for reasons unknown, he regressed after his freshman year. He’s an extremely interesting case, because I don’t know if I’ve seen another player go off that steep of a cliff throughout his career.

. . . looking beaten and frustrated. O’Korn had a very frustrating career, and I can’t blame him. He could always count on his feet, and he ran (a.k.a. took so many sacks) for -54 yards in his final year. That’s 71 fewer than his previous career low, which was 17. The offensive line couldn’t protect any of the quarterbacks, and O’Korn didn’t have any receivers who could bail him out. O’Korn took some big hits, but he looked defeated by the end of the year.

O’Korn really struggled over his last three seasons on the field, and he didn’t have the production to get him drafted. He won’t be invited to the NFL Combine, and while a lot of Michigan players at this point will get a shot with a practice squad, that’s very much in question for O’Korn. I would love to see him pull off a miracle turnaround and somehow get an opportunity at the next level, because I appreciate his leadership and how hard he plays. But if that happens, I will be very surprised.