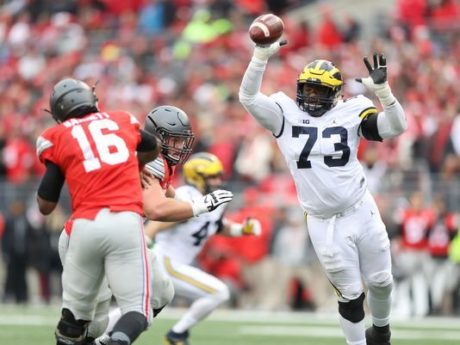 Hurst is the son of former NFL cornerback Maurice Hurst. The younger Hurst attended Westwood (MA) Xaverian Brothers, where he was a 247 Composite 4-star, the #21 defensive tackle, and #266 overall in the 2013 class. He was recruited to Michigan by Curt Mallory, while also fielding offers from Boston College, Nebraska, North Carolina, North Carolina State, and Ohio State, among others. He played a good deal of fullback in high school, too. Hurst committed to Michigan in June of 2012, and his only official visit was to Ann Arbor. He played in the Semper Fidelis All-American Bowl. I initially gave Hurst a TTB Rating of 73 (LINK) and questioned whether he would get bulky and technical enough to play nose tackle at the next level, but I bumped him to a 78 after National Signing Day (LINK).

Hit the jump for the rest of Hurst’s senior profile.

Hurst redshirted as a freshman in 2013. He played in seven games in 2014, recording 3 tackles and 1 tackle for loss. He became a late-season starter as a sophomore in 2015 after Ryan Glasgow got injured, making 35 tackles, 6.5 tackles for loss, and 3 sacks. Hurst was still technically a backup in 2016 despite excellent production: 34 tackles, 11.5 tackles for loss, 4.5 sacks, 1 forced fumble, 1 fumble recovery, and 1 pass breakup. That set up a lot of excitement for his senior year, which would be his first year of being a full-time starter. Hurst made 61 tackles, 14.5 tackles for loss, 5 sacks, 1 forced fumble, and 2 pass breakups, despite spending much of the season in an unexpected 3-3-5 that would seemingly cause him to face double-teams regularly. Apparently, that didn’t matter, as he was named First Team All-Big Ten and a consensus All-American.

My evaluation of Hurst in high school was hit-and-miss. On the negative side, I thought he would be too small to excel at nose tackle, but he proved me wrong by becoming an All-American at a position normally manned by bigger players. I also mentioned that he wasn’t as technically sound as I expected for an NFLer’s son, which . . . was a poor assumption, considering we found out later that Maurice Hurst, Sr. was largely absent from his life growing up. On the plus side, I liked Hurst’s overall athleticism and enthusiasm. I said in his eval that he was a bit of a “blank canvas,” and he showed steady progression throughout college. He went from redshirting to playing sparingly to being a part-time starter to being an extremely effective backup to being an All-American – it’s like EA Sports’ NCAA Football come to life. Pro Football Focus graded him out as the top player at any position in the country, and it’s hard to think of times where Hurst was beaten over the last couple years. It was almost a certainty that if Michigan needed a big play on the interior of the defensive line, Hurst was going to make it. He snuffed out numerous short-yardage attempts by opponents. Michigan is going to miss him.

. . . being extremely consistent and explosive. It’s rare that a guy is this steady and this much of a playmaker. Some playmakers take plays off, and some steady guys aren’t capable of getting penetration like Hurst did. Maybe it helped that Hurst played at around 280 lbs., which is much lighter than the average nose tackle, but his motor excellent.

I used to doubt that the NFL would look at Hurst as a can’t-miss draft pick and take him in the top 10 or so, but that seems more likely now. NFL teams have had a chance to take a long, hard look at Hurst, and they have to like what they see. I can’t help having some doubts about him succeeding at the same level in the NFL as a 282 lb. nose tackle, but he’s done it against anyone and everyone in college. Maybe he plays 3-tech at the next level, and the size might prevent him from going in the top half of the first round, but there’s no way he drops out of the first round. I keep seeing him coming off the board in the 20-25 range in mock drafts, and that seems about right. The NFL game in 2018 seems more conducive to having a smaller, quicker guy who can rush the passer and split double-teams, so Hurst could carve out a long career.