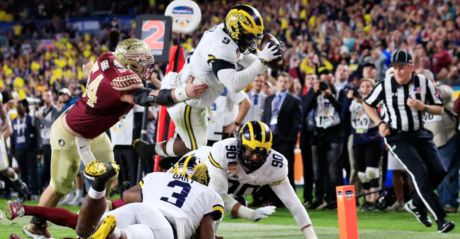 McCray attended Trotwood (OH) Trotwood-Madison and was a part of the 2013 graduating class, just a few years after Michigan wide receiver Roy Roundtree graduated from Trotwood-Madison. McCray is the son of a former Ohio State captain, so it was thought that he would end up a Buckeye, but Ohio State never offered the younger McCray. He picked Michigan over offers from Nebraska, Oklahoma, Penn State, Tennessee, and Wisconsin, along with many others. I gave him a final TTB Rating of 74 (LINK).

McCray redshirted as a freshman in 2013. In Brady Hoke’s final year as coach, McCray played special teams and as a backup linebacker, most notably blocking a punt against Appalachian State in the opener that was returned for a TD by Ben Gedeon. However, a pre-existing shoulder injury was aggravated in the spring of 2015, and he redshirted that year; there were rumors that the shoulder injury would end his career, and indeed he wore a harness on his shoulder for the next two years. When he did return in 2016, he was Honorable Mention All-Big Ten with 76 tackles, 12.5 tackles for loss, 4.5 sacks, 2 interceptions (including a TD against Florida State in the Orange Bowl), and 9 pass breakups. He followed that up with another Honorable Mention All-Big Ten season in 2017, finishing with 84 tackles, 17 tackles for loss, 5 sacks, 1 forced fumble, and 1 pass breakup.

McCray had a career that I feel I have come to expect from Michigan linebackers. Michigan isn’t the Miami Hurricanes when they had a steady flow of elite ‘backers for many years. They never have been. McCray is a guy who didn’t contribute much during his first few years on campus, but when it was time for him to play, he did an admirable job. Despite being listed at 6’4″ and 248 lbs. – pretty large for a college inside linebacker – he was surprisingly adept at reading quarterbacks’ eyes and defending the pass. On top of that, he’s #12 in career tackles for loss at Michigan, though admittedly the school didn’t start tracking that stat until the mid-1990s. I feel he got a bad rap at times for his struggles to cover running backs out of the backfield on wheel routes, but those plays are designed to take advantage of 6’4″, 248 lb. guys trying to cover the likes of Dalvin Cook and Saquon Barkley out of the backfield. Defensive coordinator Don Brown basically said, “Yes, they’re going to hit some plays against him, but I’ll take my chances.” At his size, if McCray had the speed and athleticism to cover Barkley or Cook on wheel routes, we would be talking about a potential first or second round pick.

. . . his punt block against Appalachian State in 2014 that was returned for a touchdown by Ben Gedeon.

McCray was a productive inside linebacker who looks like a 3-4 inside linebacker at the next level. He’s not an edge rusher, and I wonder if Michigan kept him at WILL linebacker instead of MIKE to cut down on how much contact he would take with a bad shoulder. He’s not your typical WILL, and his primary backup is the shorter, smaller former safety Devin Gil. McCray may have been a SAM linebacker in a 4-3, but some of those guys have disappeared or morphed into different body types now that the NFL is a passing league. McCray has the size and athleticism to play in the NFL. I think he has pretty good awareness and is more of a zone coverage guy than a man coverage player. He should be a third day pick in the NFL Draft as long as his shoulder holds up to teams’ scrutiny.