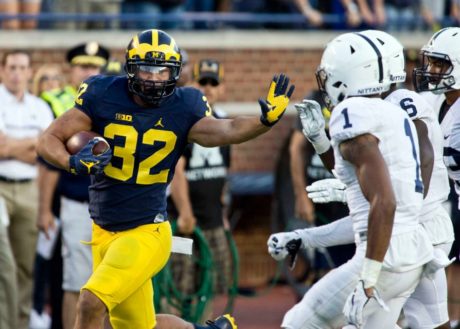 A big thank you to Eric R., Paul S., Peter F., and Alan K. for your Paypal donations to help out with hosting! You guys are awesome!

Isaac went to Joliet (IL) Catholic, where he was an Under Armour All-American in 2013. He was a 4-star recruit, the #2 all-purpose back, and #49 overall. He had 4,129 rushing yards and 64 rushing touchdowns over his final two seasons in high school. He turned down offers from Auburn, Clemson, Georgia, Michigan, Notre Dame, Ohio State, Penn State, and Wisconsin, among others, to attend USC.

Isaac was a backup at USC as a true freshman in 2013, rushing 40 times for 236 yards and 2 touchdowns; he also caught 4 passes for 57 yards. After the season he announced his intention to transfer and chose Michigan as the destination. He applied for a waiver to play immediately in 2014 due to a medical condition that did not allow his mother to fly from Illinois to California to see his games, but the waiver was denied, so he had to sit out the season. In 2015 he ran 30 times for 205 yards (6.8 YPC), including the longest run of the year, a 76-yard TD against UNLV. However, he fumbled 2 times in 6 carries in his lone start of the year against Maryland two weeks later, and he barely saw the field after that. He ran the ball 74 times for 411 yards (5.6 YPC) and 5 touchdowns in 2016, again as a backup. As a fifth year senior in 2017, he carried the ball a career-high 88 times for 548 yards (6.2 YPC) and 2 touchdowns. That included a stretch during the early part of the season when he earned the starting job, but a fumble against Michigan State seemingly caused the coaches to lose some trust in him. A lower leg injury later in the year caused him to miss the final few games of the season.

My affinity for Isaac’s abilities has been well documented over the years. I was high on him as a recruit in 2013, and I was excited for a talented runner to enter Michigan’s backfield in 2014/2015 when he transferred to Ann Arbor. For whatever reason, I don’t believe Isaac ever really got a fair shot at Michigan. The coaching staff that recruited him out of high school and then out of USC was shoved out the door following the 2014 season, and the new coaching staff did not seem to be as enamored with him. He and then running backs coach Tyrone Wheatley did not seem to see eye to eye, and De’Veon Smith dominated the carries despite averaging a mediocre 4.18 and 4.67 yards in those two seasons; his 361 carries dwarfed those of Isaac (104), Karan Higdon (83), and Derrick Green/Drake Johnson/Chris Evans (189 combined) in that stretch.

Isaac should have been benched in that Maryland game in 2015, but that doesn’t explain only getting 4 carries over the final eight games of the 2015 season. The 2016 season didn’t include any fumbles, but Isaac touched the ball just 12 times over the final six games of the year. The 2017 season saw a new running backs coach in Jay Harbaugh, and Isaac started off the year looking like I thought he would look all along. He had 114, 133, and 89 yards against Florida, Cincinnati, and Air Force, but the fumble against MSU seemed to tank his chances of getting a ton of playing time, and it didn’t help him that Higdon and Evans both played well during the second half of the season. Even so, Isaac amassed his career highs in carries and yards despite essentially missing the final five games of the year.

Of Michigan players with 100+ career carries, Isaac is tied for #4 all-time in yards per carry:

Yep, on a per-carry basis, Isaac was just as good as his position coach, former 1st round draft pick and Michigan all-time great Tyrone Wheatley. (Full disclosure: Wheatley’s 688 carries are a great deal more than Isaac’s 192 in a Michigan uniform.)

This isn’t to argue that Isaac was a superstar or great player. He should have broken more tackles, and he was not good in pass protection. But he should have been given more playing time when Smith was averaging 4.18 yards per carry in 2015, and the Wolverines could have done a better job of utilizing Isaac’s receiving skills throughout his career. He only caught 7 passes in three years at Michigan, and 247 Sports gave him a “10” rating in the “Hands” category coming out of high school. Some even intimated during his recruitment that he should play tight end, H-back, or even wide receiver because his hands were so good.

Like him or not, it was a strange odyssey for the former #49 recruit in the country.

. . . representing a strange paradox. He was objectively very productive (6.1 YPC), but he was not well liked by fans. He was big, but he was not tough. He was a good receiver, but Michigan didn’t give him opportunities to catch the ball.

I don’t think Isaac will get drafted. It’s rare that 3rd string running backs get drafted, and it’s supposed to be a fairly deep class of running backs. But if I’m an NFL team, I’ve got my eye on Isaac as an undrafted free agent. Running backs are being used more and more in the passing game, and Isaac has the ability to contribute in that phase of the game.