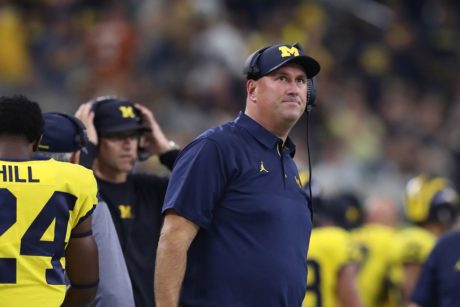 Offensive tackles/tight ends coach Greg Frey is off to Florida State to be Willie Taggart’s offensive line coach. This isn’t a surprise at all, nor is it a disappointment. When Frey was hired at Michigan, many – including me – assumed Michigan would be changing its style to a more zone-oriented scheme. It was also thought that Michigan might go more up-tempo, since Frey has spent much of his career with Rich Rodriguez (at WVU and Michigan) and Kevin Wilson (at Indiana). Additionally, Frey has done a great job of coaching up offensive linemen in the past, including tall, lanky tight end/tackle types.

The zone stuff didn’t work, the up-tempo thing never materialized, and Michigan doesn’t have any tall, lanky tackles on the roster. Oddly, it’s slightly reminiscent of Rich Rodriguez hiring a 4-3 proponent in defensive coordinator Scott Shafer when the rest of the staff was geared toward a 3-3.

It sounds like Tim Drevno will also not return, so Michigan could be looking at an entirely new coaching crew on the offensive line.

Frey is from Clearwater, and he played at Florida State and was a national champion there in the early 1990s, so it’s understandable why he would want to return to his old stomping grounds. He also coached at South Florida before he moved on to WVU.