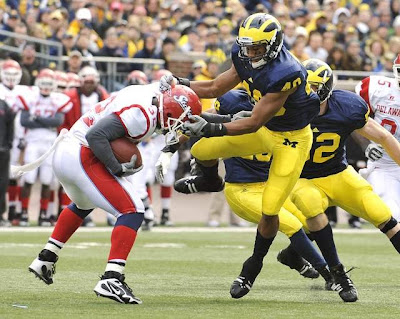 Dear Michael Williams,
First of all, let me thank you for how hard you work and how hard you play for the Michigan Wolverines. You came back from a tough knee injury as a true freshman, but you run hard and you work hard. And you hit hard, too. It’s disappointing that the internet is crawling with so many know-it-all Michigan fans who think you’re washed up, that you’re just a bad football player, end of story.
When you came out of high school in 2007, I thought you were going to be a good player. You reminded me of Brandon Harrison – short and fast but a hitter. It turned out that the Michigan staff thought the same thing. You were to be groomed as the heir to Harrison, a slot cornerback. You would learn to blitz off the edge, cover slot receivers, force sweeps back to the inside, stuff like that. You were perfect for that position. Then the knee injury happened and you redshirted as a freshman. There’s no shame in that.
Then at the end of 2007, Lloyd Carr retired. Rich Rodriguez came in to be the head coach, and he hired a guy named Scott Shafer, a young guy who had success at lower-tier programs. Shafer had plans on using you a little bit differently for the 2008 season. He still used you like Harrison, but by then, Harrison had been switched to strong safety. You had 18 tackles and a sack as a backup strong safety. That’s a pretty good year for a backup safety.
But the whole Shafer thing didn’t work out. He was fired after an abysmal year, and Rich Rodriguez hired Greg Robinson for 2009. Now here’s a coach with a track record. He coached the Denver Broncos defense to a couple Super Bowls, coordinated for the Kansas City Chiefs. This guy clearly knows what he’s doing. He worked with you a little bit and figured you’d be perfect for free safety. In his defense, the free safety plays almost like a weakside outside linebacker. This was perfect for you, too – you would be free to make plays in the running game without having to take on too many lead blockers. But then you got dinged up against Notre Dame and Jordan Kovacs took your job for a little bit.
Then came the Iowa game on October 10, 2009. Your buddy Boubacar Cissoko got suspended for the game, which meant the coaches would have to switch the starting strong safety, Troy Woolfolk, to cornerback. But you were a trooper when the coaches said you would have to take Woolfolk’s spot as the deep safety. (It was either you or Kovacs, and let’s be honest, Kovacs is about as fast as Johnny Thompson.) Of course, Iowa has some pretty good coaches, and they noticed that you were a newbie back there at safety. I mean, when was the last time you played a deep third? In high school when you played free safety? Anyway, the Hawkeyes took advantage of you for one big play, in particular. And then the fan base jumped all over you.
In the Illinois game, you were back to playing close to the line of scrimmage. And I have to admit, you didn’t play well. You might have made 17 tackles, but Juice Williams had his way with you. You didn’t keep outside contain on the QB, and that gave the Illini some big chunks of yardage. But you know that, right? I mean, I’m sure the coaches didn’t have to tell you that you screwed up for you to realize it.
Since the Iowa game, fans have been all over you. You’ve been yo-yoing back and forth between FS and SS, and the coaches have been trying to figure out which position suits you best. The truth is, you’re probably not ready to play. At a lot of schools, you’d probably be sprinting down the field on special teams and standing on the sideline when the defense is on the field.
But these fans, they want perfection. See, when they were 18 and got a job at McDonald’s running the cash register, they messed up an order one time. So they immediately got fired and put on the fryer. But on their second day with the fryer, they left the fries in for too long and got moved to sweeping the floors. And they did just fine with that. And that’s how they learned that the only way to improve isn’t by repetition – it’s by being fired from job after job until they find one that they’re actually smart enough to do.
I hope you caught on to my sarcasm, because I realize that it must be tough for you. You’ve played four different positions for three different defensive coordinators and two different position coaches in three years. I want you to perform well, and I get frustrated when you don’t. But most of the people who attack you and say you’re washed up, they don’t understand. They figure that if Greg Robinson plugged you in at middle linebacker or punter, you could be good at those positions within a week. But the smart ones know better. Listen to the smart ones.
Sincerely,
Thunder