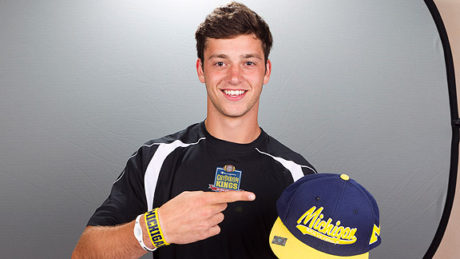 Former Michigan insider Tom Van Haaren, who still concentrates a lot on the Wolverines, reported earlier tonight that redshirt junior quarterback Shane Morris will transfer (LINK). Since he would be entering his fifth year of college with an undergraduate degree, he could transfer into any grad program that Michigan does not offer.

Morris committed to Michigan in May of 2011, even though he was a 2013 prospect. He was a 247 Composite 4-star, the #3 pro-style quarterback, and #72 overall out of Warren (MI) De La Salle. He was invited to the Elite 11 and played in the Under Armour All-America Game. At the time he was viewed as Michigan’s savior at quarterback, since then coach Brady Hoke was a pro-style guy and Morris was a borderline 5-star prospect to some services. Ultimately, though, the lack of development from Morris may have contributed to Hoke’s ouster. As an injury replacement for Devin Gardner, he completed 29/47 passes for 261 yards, 0 touchdowns, and 2 interceptions as a freshman, including his best career performance in the Buffalo Wild Wings Bowl after Gardner broke his foot. In that game he was 24/38 for 193 yards, along with 4 carries for 43 yards in the loss. Things were downright terrible in 2014 when he was 14/40 for 128 yards, 0 touchdowns, and 3 interceptions; the concussion he suffered against Minnesota induced new protocols throughout college football, since he was left in the game after taking a shot to the head/neck area and stumbling around for a moment.

When Jim Harbaugh arrived in 2015, Morris was #2 on the depth chart to begin the season, even though the coaching staff was trying to preserve a redshirt year. That was presumably to help him secure a grad transfer later in his career. He sat behind Jake Rudock and was eventually passed by Wilton Speight for the backup gig, anyway. Going into the 2016 season, he was a solid #3 behind Speight and John O’Korn. Morris played in certain packages this past season, mostly handing off the ball or leading the way on some toss sweeps. He was 4/5 for 45 yards this season, along with 3 carries for 19 yards, while playing in just six games.

Morris’s departure was expected. Michigan has a returning starter in Speight and some quality quarterbacks coming in the pipeline. The fate of backup John O’Korn is up in the air, since he also appears to be behind Speight going forward, but there was going to be a logjam with upperclassman quarterbacks. This development won’t hurt Michigan on the field. It opens a door for a potential contributor to get a scholarship.

Transfers and grad transfers often like to go close to home, so I would be inclined to guess that Morris will end up at a MAC school to finish out his career. Along with some big-time offers, he was pursued by Bowling Green, Central Michigan, and Toledo in high school. I’m not familiar with the quarterback situations at each school, but with his college track record, I sincerely doubt he’s going to get a look from another Power Five school unless they’re extremely desperate. 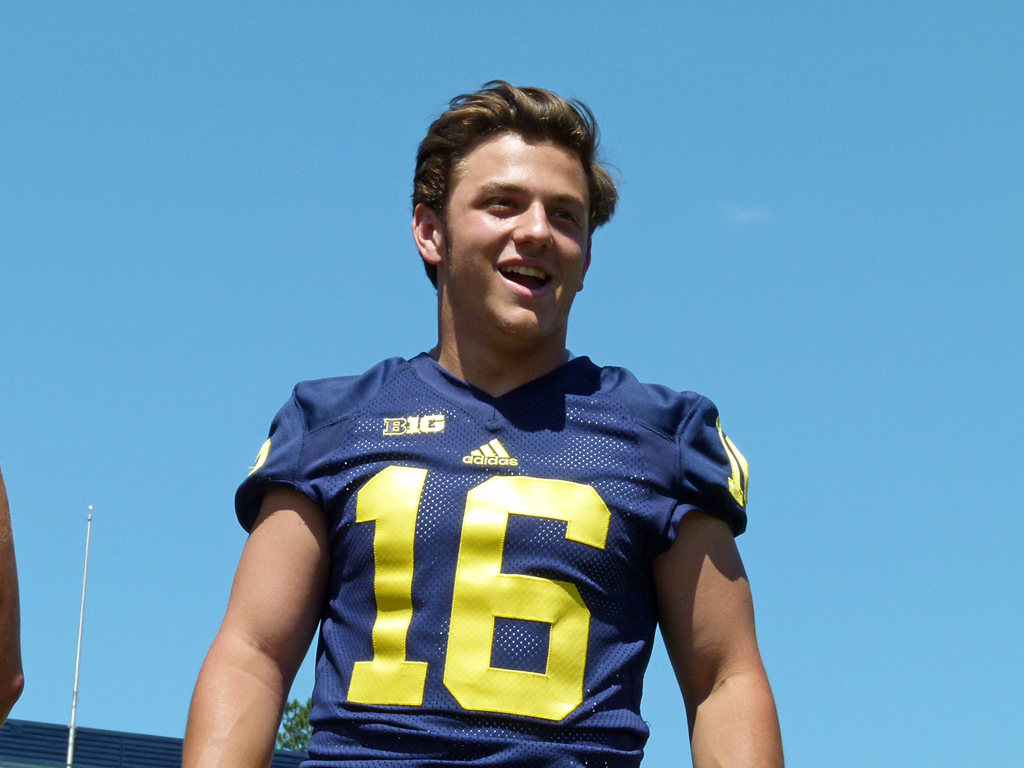 Please consider making Amazon purchases through this link (LINK) to help out the site.

Redshirt freshman kicker Andrew David is reportedly transferring to TCU, which is an interesting location, considering that senior running back Derrick Green is also headed there.

David committed to Michigan in June of 2013 as part of the 2015 recruiting class (LINK). He was a 3-star and the #9 kicker in that class. He redshirted last year. I’m admittedly not an expert on kicking, so I mostly left it up to the recruiting sites to determine whether he was any good or not, and they generally thought he was. However, I did not hear great things coming out of practice about him, and when I saw him kicking at Ford Field this spring, I was very underwhelmed. After redshirting in 2015, he was expected to ride the bench this year with fifth year senior Kenny Allen and perhaps true freshman Quinn Nordin handling kickoffs, punts, and placekicking.

END_OF_DOCUMENT_TOKEN_TO_BE_REPLACED

Redshirt sophomore defensive tackle Brady Pallante is not listed on the just-released fall roster. The 6’1″, 280-pounder was recruited by Brady Hoke in the 2014 class and was expected to be an undersized nose tackle. Jim Harbaugh moved him to fullback in spring 2015, but he played defensive tackle when injuries took their toll on Michigan’s defensive line. I thought he might develop as an upperclassman, but the position switch probably didn’t help him gain the necessary size and strength to be a Big Ten nose tackle. Michigan has also done a great job of recruiting and developing nose tackles, so he would have been no higher than fourth on the depth chart going into this season. I ranked him at #67 in the 2016 Season Countdown (LINK).

Michigan is down to 84 allotted scholarships for 2016 (LINK), and that includes walk-ons Kenny Allen and Ryan Glasgow. So one more lucky, hardworking walk-on will be rewarded with a scholarship this year.

END_OF_DOCUMENT_TOKEN_TO_BE_REPLACED

Dukes committed to Michigan in February of 2012, almost a year before National Signing Day (LINK). I ended up giving him a TTB Rating of 59. Some people pointed to his solid performance against Ohio State-bound cornerback Cam Burrows in high school, but Dukes was a limited athlete. He played in just one game in his college career, which was in 2015. Otherwise, he was mired on the bench. His one shining moment throughout his career was the 2015 spring game, in which he caught a touchdown pass from Shane Morris over 5’7″ cornerback Dennis Norfleet.

Dukes is the tenth member of the 2013 class to leave before exhausting his eligibility, and his departure cinches up the fact that Michigan’s class of receivers was a dud. Fellow receivers Csont’e York (legal troubles) and Da’Mario Jones (a few catches before transferring to BGSU) did not pan out, either. The Wolverines are very thin at receiver and had to use walk-ons frequently this spring, but Dukes’s departure should not affect the team much. He was not expected to play much, and the program signed five receivers in the 2016 class.

Michigan is down to 87 scholarship players allotted for the 2016 season (LINK) and either needs to shed two more players or withhold scholarships from walk-ons. There’s also the possibility that freshman linebacker Dytarious Johnson will not qualify, which would get Michigan down to 86.

With all the hoopla surrounding spring practice, the spring game, and a bunch of new commitments, one thing I forgot to mention was the departure of a couple players. One of them is redshirt junior Reon Dawson. After Michigan’s open practice at Ford Field, Jim Harbaugh mentioned that Dawson was no longer on the roster and would be seeking a medical scholarship.

Dawson committed to Michigan in January of 2013, just a few weeks before National Signing Day. I gave him a TTB Rating of 62 (LINK). He had some minor injuries over the years, but his talent level was not on par with the other cornerbacks on the roster, and he never played a down at Michigan. He was passed up by younger players, and some of the incoming freshmen were probably bound to pass him up, too. Dawson was participating in spring practices down in Florida, so something happened since that time for him to end his playing career. Of course, there is the possibility that he will transfer elsewhere if he does not get a medical scholarship.