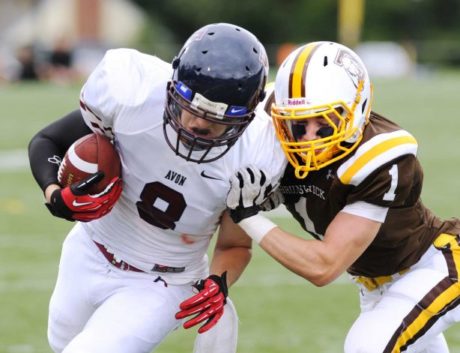 2015
Chris Clark – TE – Avon (CT) Old Farms: Clark is a 6’6″, 247 lb. prospect who recently decommitted from North Carolina; he also has offers from Michigan, Notre Dame, and Ohio State, along with many others. He’s a 247 Composite 4-star, the #3 tight end, and #130 overall. As a junior in 2013, he caught 39 passes for 417 yards and 6 touchdowns. Recruiting gurus are picking Notre Dame, where he visited a couple weekends ago, but he has yet to visit Columbus or Ann Arbor.

Grant Newsome – OT – Lawrenceville (NJ) Lawrenceville School: I typed up a scouting report on Newsome at the end of March. He recently picked up an Arkansas offer and visited Penn State.

2016
Ben Bredeson – OT – Hartland (WI) Arrowhead: Bredeson is a 6’5″, 275 lb. prospect with offers from Iowa State, Michigan, Tennessee, and Wisconsin. He visited Michigan for the spring game a couple weekends ago and also took a swing through Columbus and Knoxville. The Badgers are considered to be the leader.

ADDED TO THE BOARD: 2015
Indianapolis (IN) Ben Davis linebacker Asmar Bilal was offered by Michigan. Bilal is a 6’3″, 201-pounder with offers from Illinois, Indiana, Iowa, Michigan State, Minnesota, Nebraska, Northwestern, Notre Dame, Virginia Tech, and Wiscinson, among others. He’s a 247 Composite 4-star, the #7 inside linebacker, and #224 overall. He picked up the Michigan and Notre Dame offers at the end of last week, and those two appear to be the front-runners right now, with Notre Dame perhaps holding a slight edge. Bilal visited Michigan back in late February. Despite his ranking as an inside linebacker, Bilal is a lanky prospect with some explosiveness in the mold of a Chase Winovich and other players Michigan has pursued for the SAM linebacker position in recent years.

Indianapolis (IN) Lawrence Central linebacker Darrin Kirkland, Jr. was offered by Michigan. Kirkland is a 6’2″, 228 lb. prospect with offers from Illinois, Indiana, Kentucky, Louisville, Maryland, Mississippi State, North Carolina, Ole Miss, Penn State, Purdue, Tennessee, Virginia Tech, and Wisconsin, among others. He’s a 247 Composite 4-star, the #6 inside linebacker, and #201 overall. Kirkland had 110 tackles and 8 sacks as a junior in 2013. He’s definitely an inside linebacker prospect who probably looks the part of a middle linebacker more than anyone since Kenny Demens. Kirkland is a vicious hitter with pretty good instincts, but lacking in elite speed. Both linebacker offers probably have something to do with last week’s commitment by Merrillville (IN) Andrean linebacker Josh Barajas to Penn State. Barajas was offered by Michigan as a MIKE, and the Wolverines were in a good position with him, so this is an “EA Sports NCAA Football” moment – the #1 guy in Indiana commits elsewhere, so Michigan extends offers to #2 and then #3.

ADDED TO THE BOARD: 2016
Hartland (WI) Arrowhead offensive tackle Ben Bredeson was offered by Michigan. Bredeson is a 6’5″, 270 lb. prospect with offers from Iowa State, Tennessee, and Wisconsin. He will likely be one of the top few players in Wisconsin for 2016, perhaps the best. Bredeson is a mauler, and while he may not have the height/length to play tackle over the long run, he could also be effective as a guard. He was offered when he visited for the spring game this past weekend, but the Badgers are the presumed leader here.

OFF THE BOARD
McKinney (TX) North running back Ronald Jones II committed to Oklahoma State. Jones had not visited Michigan and was a long shot, so it’s not much of a surprise that he didn’t pick the Wolverines. However, it seemed at one time that Baylor was the likely destination, and 247’s Crystal Ball had him at 46% for Baylor,  46% for Oklahoma, and 8% for Notre Dame.

Southfield (MI) Southfield defensive end Malik McDowell finally signed his National Letter of Intent to attend Michigan State. He committed to MSU on National Signing Day, but most of us know the story: his mother disapproved of the choice because of a bad experience, so she wouldn’t sign the paper. She finally capitulated on the last day possible, which was April 1. There had been persistent rumors that Michigan might be a compromise choice between Malik and his parents, but that is obviously no longer a possibility.

MISCELLANEOUS
Here’s a list of visitors from last week and from Saturday’s spring game.

I released my final TTB Ratings for the class of 2014.

I also posted my initial TTB Ratings for the class of 2015.

Tampa (FL) Plant offensive tackle Jake Fruhmorgen will announce his college decision at 3:15 p.m. on Thursday. He visited Michigan two weekends ago, but he is likely to pick Clemson.