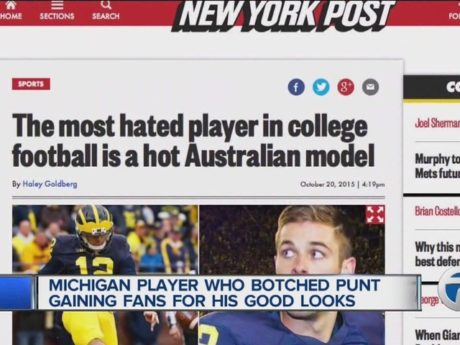 This headline is a bit over the top, but that’s what the New York Post does sometimes.

HIGH SCHOOL
We weren’t aware of O’Neill as a high schooler, since he attended school in Australia. He was a team captain for his high school Australian Rules football team, and he was a shot putter.

COLLEGE
At Weber State in 2014, he averaged 44.1 yards/punt, which was #6 in the country. He also had a 17-yard run and a 23-yard pass on fake punts. Because of his unique academic situation due to being Australian, he used a grad transfer after one year at WSU to end up at Michigan for the 2015 season. Michigan – under one-year rental John Baxter as special teams coach – converted to a rugby-style punt to suit O’Neill’s talents. He started every game at Michigan, averaging 41.3 yards/punt on 53 attempts.

Hit the jump for the rest of the senior profile on Blake O’Neill.

END_OF_DOCUMENT_TOKEN_TO_BE_REPLACED

I have not been alive forever, but those are the three worst finishes to Michigan games that I can remember. I’ll throw in an honorable mention to Spartan Bob and T.J. Duckett, but the above three are worse, in my opinion.

END_OF_DOCUMENT_TOKEN_TO_BE_REPLACED 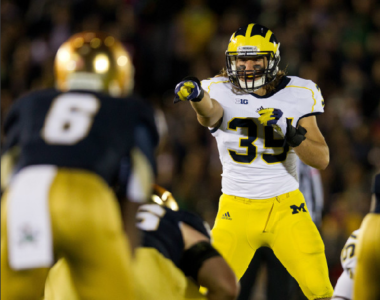 Phil Steele released his pre-season All-Big Ten teams (LINK). Since these are almost all potential opponents this season, instead I’ll highlight guys whom Michigan recruited out of high school. Ohio State leads the way with 15 players on the four teams. Michigan State is second with 13. Rather than listing all of the teams ahead of Michigan, I’ll just say that Michigan’s six players on the list are only ahead of Illinois, Northwestern, and Purdue.

*Was not recruited by Michigan, but is the brother of Michigan center Patrick Kugler 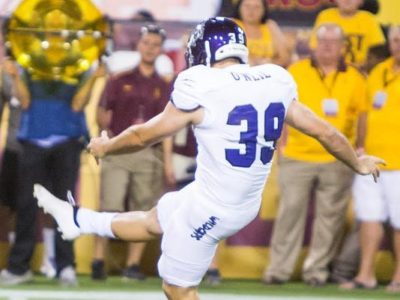 Weber State punter Blake O’Neill is transferring to Michigan. He has spent just one year playing American football and will be eligible as a fifth year senior graduate transfer in 2015.

O’Neill brings an array of punting talents to Michigan. He can deaden the ball near the goal line, punt directionally, boom it deep, and generally limit return yardage. The nice thing about punting is that it translates well from one level or team to the next, so regardless of whether he’s playing at Weber State or in the Big House, his kicks are going to travel a long way if that’s what he wants.

Michigan has had good punters for a while, including Zoltan Mesko and Will Hagerup in recent years. Unfortunately, Hagerup was inconsistent at times and even missed the entire 2013 season due to suspension. However, punt coverage was spotty last year, which should improve with the arrival of O’Neill as well as full-time special teams coach John Baxter.

O’Neill gives Michigan three scholarship specialists, including incoming freshman kicker Andrew David and redshirt sophomore long snapper Scott Sypniewski. However, O’Neill also puts Michigan at 87 scholarships for the upcoming season, which means that two players need to come off scholarship before the fall. There is at least one player who could become a medical casualty (Chris Fox), and there are a few walk-ons who have had scholarships in the past that might have to pay their own way (Graham Glasgow, Ryan Glasgow, Joe Kerridge).