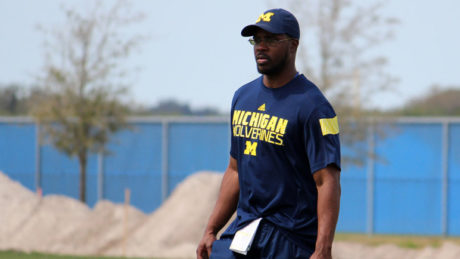 Michigan will be on its third safeties coach of the Jim Harbaugh era, following Greg Jackson in 2015 and Smith in 2016-2017. The safeties played fairly well under Smith, considering he had two first-time starters (Tyree Kinnel, Josh Metellus) in 2017 and helped get Delano Hill to be a mid-round draft pick. However, the safeties were considered to be the weak spot of Michigan’s defense in 2017.

It’s possible that cornerbacks coach Mike Zordich could take over the entire secondary, and it’s also possible that Michigan promotes from within – Devin Bush, Sr. is a former NFL and Florida State player who was a big-time head coach in Florida. Otherwise, I have confidence that whoever Jim Harbaugh and Don Brown bring in will do a very good job with the players on the field. As a recruiter, Smith wasn’t talked about much by recruits, so perhaps the next guy will have a little more pull.

On a side note, Scott Turner is slated to become Michigan’s 10th assistant coach following the New Year, but he’s an offensive guy who will probably slide in as the wide receivers coach. It will be interesting to see whether it’s Turner or some other staffer who steps in for Smith on the recruiting trail for now, since non-coaches can’t recruit.