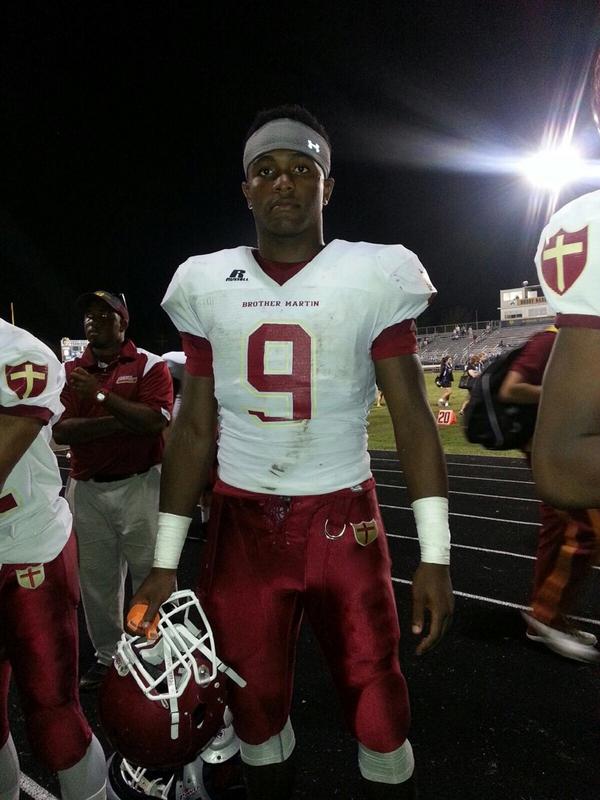 ADDED TO THE BOARD: 2017
Tampa (FL) Tampa Bay Tech wide receiver Daquon Green was offered by Michigan. He’s a 6’1″, 183 lb. prospect who has offers from Auburn, Clemson, Florida, Georgia, and Miami, among others. He’s a 247 Sports 4-star, the #33 wide receiver, and #210 overall. He earned his offer after the satellite camp in Florida, and he also attended the Sound Mind Sound Body camp this past weekend. He’s a speed player who can go get the ball and run after the catch.

Salt Lake City (UT) Brighton running back Sione Heimuli-Lund was offered by Michigan. He’s a 6’0″, 220 lb. prospect with offers from Arizona State, BYU, Oklahoma State, Stanford, and Utah, among others. He’s a 247 Composite 4-star, the #15 running back, and #160 overall. Lund is a somewhat squat running back who might turn into a fullback or a linebacker in college. He is a teammate of 2016 wide receiver and Michigan target Simi Fehoko, as well as 2015 linebacker Osa Masina (USC). The Wolverines have two Salt Lake City natives currently on the team, though they went to Highland: fullback Sione Houma and defensive tackle Bryan Mone.

Baltimore (MD) Our Lady of Mt. Carmel defensive end Joshua Kaindoh was offered by Michigan. He’s a 6’6″, 235 lb. prospect with offers from Alabama, Clemson, Florida State, Georgia, Ohio State, and Penn State, among others. He’s a 247 Sports 4-star, the #2 weakside end, and #53 overall. Kaindoh is a long and lanky end or even outside linebacker, but the early favorite appears to be Ohio State.

Bellaire (TX) Episcopal offensive tackle Walker Little was offered by Michigan. He’s a 6’7″, 301 lb. prospect with offers from Arizona State, Baylor, Oklahoma, Oklahoma State, and TCU, among others. He’s a 247 Sports 3-star, the #30 offensive tackle, and #302 overall. He’s a huge human being who looks like a college player already. Little is a teammate of 2017 defensive tackle Marvin Wilson, who has Michigan in his top five.

New Orleans (LA) Brother Martin linebacker Bruce Jordan-Swilling was offered by Michigan. He’s a 6’2″, 215 lb. prospect with offers from Florida, LSU, Miami, and Oklahoma. He’s a 247 Sports 4-star, the #5 outside linebacker, and #88 overall. Jordan-Swilling is also a standout running back, although his future is probably on defense. He is the son of former New Orleans Saints Pro Bowl linebacker Pat Swilling. Michigan has also offered two of Bruce’s 2016 teammates, tight ends Peyton Aucoin and and Irvin Smith, the latter of whom is also the son of a former NFLer. Also as an aside, Brother Martin also boasts Bruce’s twin brother (a cornerback who is somewhat less heralded) and another running back named Jordan Bruce. So Jordan Bruce, Bruce Jordan-Swilling, and Tre Swilling are all on the same team. “Hey, Bruce, get over here! No, not you, Jordan. I mean Swilling, get over here! No no no, not you, Tre. Dammit, Bruce Jordan-Swilling, GET OVER HERE! Finally. So…can you get me a water bottle? I’m parched. Thanks.”

Fort Lauderdale (FL) Dillard wide receiver Jordan Merrell, a Cincinnati commit, was offered by Michigan. He’s a 5’10”, 176 lb. prospect who earned his offer at the Florida satellite camp. Merrell plays some running back and could end up at either position in college.

Fort Lauderdale (FL) St. Thomas Aquinas wide receiver Joshua Palmer was offered by Michigan. He’s a 6’3″, 190 lb. prospect who also has an offer from Temple. Palmer transferred from a school in Canada to St. Thomas Aquinas this offseason, to this coming year will be his first year of playing football in America. He did play in the International Bowl against the United States, where he made a few nice plays. Michigan is recruiting several other plays at St. Thomas Aquinas in the 2017 and 2018 classes.

Memphis (TN) Trezevant running back Cordarrian Richardson was offered by Michigan. He’s a 6’0″, 220 lb. prospect with offers from Alabama, Auburn, Clemson, Florida, Florida State, Georgia, LSU, and Tennessee, among others. He’s a 247 Sports 4-star, the #21 running back, and #266 overall. Richardson attended the Sound Mind Sound Body camp at Macomb (MI) Dakota this past weekend and also made a stop at Michigan’s campus, where he was offered.

ADDED TO THE BOARD: 2018
Oak Park (MI) Oak Park offensive guard Marquan McCall was offered by Michigan. He’s a 6’3″, 280 lb. prospect whose only other offer comes from Akron. McCall worked out at the Sound Mind Sound Body camp in front of Michigan’s coaches, and they offered him shortly thereafter. He is a teammate of 2017 offensive tackle Ja’Raymond Hall, who also holds a Michigan offer and seems likely to drop for Michigan at some point.

MISCELLANEOUS
Detroit (MI) Cass Tech safety Jaylen Kelly-Powell named Michigan his leader. After observing him at the Sound Mind Sound Body camp late last week, the coaches say he could play either cornerback or safety for them.

Warren (MI) De La Salle running back Allen Stritzinger also named Michigan his leader. Stritzinger’s next biggest offer is from Cincinnati, so that’s not much of a surprise. Stritzinger is a guy who could play running back, wide receiver, cornerback, or safety at the next level.

Over on Recruiting Season: