I know this seems a little bit late, but since I just wrapped up the final TTB Ratings for 2019, I thought it would be time to share “recruiting awards” for the 2019 class. Feel free to pipe in with your own choices, and you can glance back at, say, the 2016 awards (LINK) to see how I did (what’s up, Andrew David?).

Best Overall Recruit: S Daxton Hill
It was a battle to land Hill, who was sought by everyone. Some thought he would go to the home-state Sooners; some thought he would go where his older brother did, Oklahoma State; he was committed to Alabama for a time; and he committed to Michigan twice. He was the #14 overall player to the 247 Composite, and I have him with a 100 as the best safety in the class.

I gave Hill a TTB Rating of 100, which means I think he’s the best safety prospect in the country from the class of 2019. And in all honesty, I don’t think it’s really all that close. I’m not impressed with the other top safeties in the class, and I think it’s a down year at the position overall.

Will he play like the best safety in the country at Michigan? There’s reason to have doubts. Michigan’s safeties are not always big-time playmakers and can sometimes be rather forgettable. Josh Metellus was not a standout initially, and Tyree Kinnel was a 4-star who was somewhat forgettable. Delano Hill made some big plays but not consistently.

Furthermore, safety is a tough position to play as a freshman, because so much depends on getting aligned correctly, recognizing formations, communication, and recognizing route combinations. And on top of that, Hill didn’t enroll until the summer, so he missed spring ball that some freshmen used to get acclimated to college ball and Don Brown’s system.

Much was expected of Dymonte Thomas coming out of high school, and Thomas had a rough freshman year. He’s probably the closest approximation to Hill that Michigan has had in the past twenty years, a lanky guy with speed to burn. (Although in fairness, Thomas was basically playing middle linebacker in high school so he could run sideline to sideline and stop the run.) Like Thomas, Hill is expected to start out repping at nickel corner, a spot that doesn’t have a clear front-runner going into the season.

So what should we expect to see from Hill in 2019? Flashes of excellence and some struggles. By mid-season, I expect him to be the starting nickel corner, barring injury at the safety position. The Wolverines have significant depth at safety (Metellus, J’Marick Woods, Brad Hawkins, etc.), but any injuries could cause a reshuffling in the secondary. There have even been rumors that Hill could end up playing cornerback if injuries/illness affect that position a great deal (like the issue Ambry Thomas is dealing with now). Expecting greatness from Hill immediately is probably wishful thinking, but his 2020 and 2021 seasons look very bright as one of the most explosive overall athletes in the entire nation.

Cornerback Lavert Hill is being “a real leader” through his yearly spring injury problems (LINK).

I will be committing on October 11th 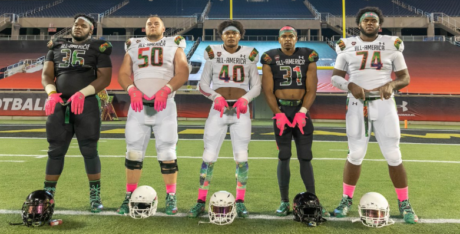 Rivals put together a series of exit interviews from the All-American Bowl, including getting some responses from Michigan signees Daxton Hill and Chris Hinton, Jr.:

Here are a couple analyses of Chris Hinton . . .

Here’s a link to the visitor list for this weekend (LINK).