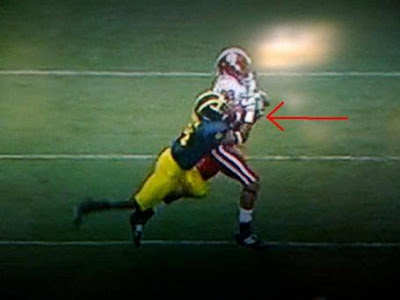 Bill Lynch will throw his gum in 3…2…1…
The interception that essentially ended Michigan’s 36-33 victory over Indiana was strongly disputed. I have to admit that as I watched the play unfold in real time, I assumed Indiana would retain possession. But despite my initial reaction, the on-field call was “interception” and the replays proved to be inconclusive.
On the play, Michigan cornerback Donovan Warren jumped a slant pass from Indiana quarterback Ben Chappell to wide receiver Demarlo Belcher. Warren reached in front of Belcher with both hands while Belcher waited for the ball to come into his body. Without the ball ever touching the ground, both players fell to the turf and had a momentary tug of war. Possession was awarded to Warren.
The rule on simultaneous possession is as follows:
ARTICLE 8. A simultaneous catch or recovery is a catch or recovery in which there is joint possession of a live ball by opposing players inbounds (A.R. 7-3-6-II and III).
This rule is tricky because it doesn’t define “possession.” As you can see in the screencaps from Maize n Brew, it appears that Belcher never really had control of the ball. Even though both players fell together with the ball between them, that doesn’t mean Belcher ever had possession. My interpretation of the word “possession” is controlling the ball with one’s hand(s), and it doesn’t seem that Belcher ever had that. The only visual evidence of possession, by that definition, shows that Warren had better control of the ball than Belcher.
As Indiana fans will argue, it doesn’t matter who wins the tug of war at the bottom of the pile; when the possessor of the ball is down by rule, the play should be over. But if neither player possesses the ball at the time when the players hit the ground, it’s impossible to say who should be awarded the ball. When you see a receiver on the ground who’s bobbling the ball, he’s not given possession until that ball is controlled without hitting the ground (see Mario Manningham’s catch vs. the Cowboys last Sunday). Belcher never controlled the ball and when someone finally did control it, that someone was Warren.
Indiana fans will surely never let this die. As you can see from the Maize n Brew comments, they are bitter. Just like Penn State fans still complain about the :01 left on the clock in 2005 and Michigan fans still complain about MSU’s last-“second” TD pass to T.J. Duckett in 2001, Indiana will probably hold on to Interceptiongate for a while.
But I don’t care. The referees weren’t impressive either way. They missed several holding calls against Indiana, and they called J.T. Floyd for pass interference on a ball that was clearly uncatchable. I don’t think Warren’s interception was necessarily a bad call, but I wouldn’t have been surprised if it had gone the other way, either.
The bottom line is this: If you leave the game up to the referees, that’s your fault. It was a tight game the entire way. Indiana settled for several field goals in the red zone when the Hoosiers offense bogged down. If they had scored a TD on any of those possessions, things might have ended differently.