Trevon Raphael – WR – Solon (OH) Solon: Raphael is a 6’3″, 190-pounder with offers from Cincinnati, Kentucky, Maryland, Penn State, and West Virginia, among others. He’s a 247 Sports 3-star, the #69 wide receiver, and #475 overall. Raphael is a long-striding speedster, but he has only played one year of football and it shows.

Hit the jump for a look at several players who went off the board.

END_OF_DOCUMENT_TOKEN_TO_BE_REPLACED 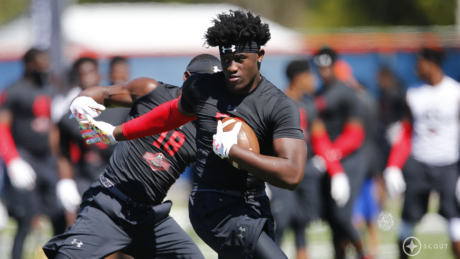 Palm Beach (FL) Central cornerback Akeem Dent was offered by Michigan. Dent is a 6’1″, 170 lb. corner who decommitted from Miami in March. He’s a 247 Sports 4-star, the #1 cornerback, and #6 overall, and has offers from Auburn, Clemson, Florida, Florida State, and LSU, among others. He transferred to Central from Pahokee, which is the alma mater of former Michigan players Martavious Odoms, Brandin Hawthorne, and Richard Ash. As a sophomore at Pahokee in 2016, he made 40 tackles and 3 interceptions, 2 of which he returned for touchdowns.

Loganville (GA) Grayson linebacker Kevin Harris was offered by Michigan. He’s a 6’4″, 210 lb. outside ‘backer with offers from Georgia and Oklahoma, among others. He’s a 247 Sports 4-star, the #9 outside linebacker, and #109 overall. Harris is a little bit thin right now, and he might end up at either linebacker or defensive end, depending on how his body develops. He attends the same school where Michigan incoming freshman Kurt Taylor played during his senior year, a powerhouse program in the state of Georgia.

Fort Myers (FL) Dunbar defensive end Derick Hunter was offered by Michigan. Hunter is a 6’5″, 245 lb. strongside end with offers from Florida, Florida State, Notre Dame, and Oregon, among others. He’s a 247 Sports 4-star, the #13 strongside end, and #166 overall. With two years of high school remaining, I think Hunter might grow into a 3-tech defensive tackle before all is said and done.