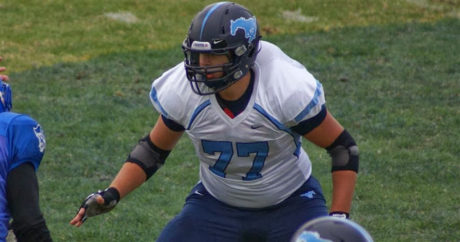 Downers Grove (IL) South offensive tackle Erik Swenson committed to Michigan’s coaching staff on Sunday night and made it public on Monday. He chose the Wolverines over offers from Illinois, Northwestern, Notre Dame, Ohio State, Oregon, and Virginia Tech, among others.

Swenson is a 6’7″, 285 lb. prospect for the 2016 class, meaning he just finished his sophomore season in high school. Measurables are sparse since he’s a youngster

Swenson grew up as a Michigan fan and was favoring the Wolverines from early in the process. There was some miscommunication early in his recruitment that led some sites to report a scholarship offer from Michigan, but that was later cleared up . . . and then the staff offered him after all in late May of this year. Swenson tried to explore his options a little bit and visited a couple other campuses, but ultimately, he ended up picking his childhood favorite.

There’s not a ton of video on Swenson, and even the available video is mostly from his freshman season (except a few clips from one game as a sophomore). So criticisms here are to be taken with a grain of salt, since it’s rare that freshmen are worthy of being closely evaluated by recruiting analysts, services, etc.

Swenson is a big body who has a solid frame through his middle and plenty of room to add muscle to both his upper body and lower body. He is somewhat capable of moving his feet laterally to stay in front of rushers, and he’s quick enough to move up to the next level and latch onto linebackers. Once he gets attached to a defender, he runs his feet fairly well and is difficult to disengage. He has a good, balanced stance and comes out of it with a decent pad level, although he will need to lower it as he plays stiffer competition; the flexibility and balance are present, though.

There seem to be a lot of technical mistakes, however, and that’s going to happen with a freshman/sophomore lineman. Swenson often has a slow, tentative first step, which will get him beaten regularly against better competition; that’s one thing that absolutely has to get fixed. It’s not that he lacks the athleticism but he looks unsure of exactly where he should step or whom he should block. He also tends to hop out of his stance at times, which prevents him from getting momentum and can get him off balance. I would like to see Swenson keep his elbows closer to his frame and develop more of an initial punch, because he currently tends to wind up and cock back before shooting his arms. In pass protection, Swenson needs to keep a wider base and prevent himself from overextending the arms. Additionally, I would like to see him finish blocks with a little nastier disposition and find guys to hit rather than jogging behind the play. Most of the above critiques are typical of young players and should improve as his high school career continues, but they’ll be something to watch as the next couple seasons pass.

Overall, Swenson’s frame and natural athleticism suggest a high-level prospect, but it will be interesting to see whether his skills, agility, and footwork continue to progress or if he’s just an early developer. I do not see the lateral agility and athleticism to project him as a blindside tackle, and he looks like more of a run blocker at this point. For a Michigan comparison, I would suggest a player like Jon Jansen.

Swenson is the first commit for the class of 2016. It’s too far out to project exactly how big that class will be, but 17 players are scheduled to be seniors in 2015. Considering injuries and attrition, it’s likely that the class will be over 20 players strong. If you’re looking at a 1-for-1 replacement in regard to positions, Chris Bryant is the only offensive lineman scheduled to be replaced in that class, so the need for linemen may not be huge.

TTB Rating: I will not be assigning a rating until the 2015 class wraps up.