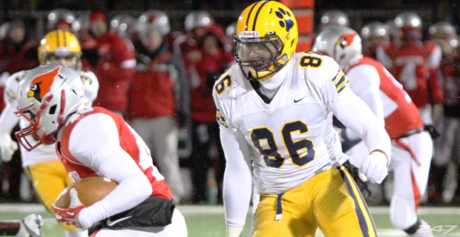 ADDED TO THE BOARD: 2015
Cleveland (OH) St. Ignatius defensive end Dre’Mont Jones was offered by Michigan. He’s a 6’5″, 250 lb. prospect with offers from Cincinnati, Indiana, Iowa, Kentucky, and Ohio State. He’s also a 247 Composite 4-star, the #14 strongside end, #294 overall, and the #15 player in the Buckeye State. Jones is quick off the ball but he could be one of those guys who grows into a 3-tech defensive tackle. Michigan has gone after several St. Ignatius prospects in recent years, but the last one they landed was linebacker Jake Ryan in the 2010 class. Jones himself appears to be leaning heavily toward Ohio State.

OFF THE BOARD
Merrillville (IN) Andrean linebacker Josh Barajas committed to Penn State. Michigan had been in his top three, but Penn State pulled ahead on a recent visit. This may open the door for a player like Indianapolis (IN) Lawrence Central linebacker Darrin Kirkland, Jr. to be offered, and Michigan would likely jump to the top of Kirkland’s list.

Dallas (TX) South Oak Cliff safety Prentice McKinney committed to Notre Dame. The Fighting Irish and Michigan were supposedly his top two, but obviously, the Irish pulled ahead. He has yet to visit South Bend, and sometimes those types of commitments are a little iffy before all is said and done.

MISCELLANEOUS
Here’s a short list of this past weekend’s visitors.

Over at Recruiting Season, I profiled Avonte’ Bell, Parker Underwood, Shahid Bellamy, Cameron Lewis, and Thiyo Lukusa. If you have a teammate or player who’s a Division I prospect and has yet to be profiled, drop me an e-mail or leave a comment.