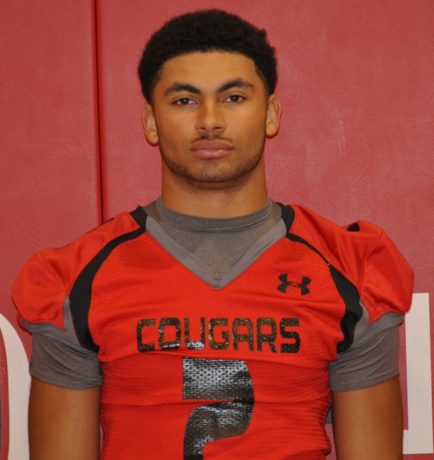 ADDED TO THE BOARD: 2015
Douglasville (GA) Alexander running back Mikell Lands-Davis was offered by Michigan. He’s a 5’11”, 205 lb. prospect with offers from Clemson, Miami, Wisconsin, and a few lesser programs. He’s a 247 Composite 3-star, the #42 running back, and #525 overall. As a junior in 2013, he ran 317 times for 2,374 yards and 27 touchdowns, and he caught 22 passes for 358 yards and 1 score. Lands-Davis has very good balance but lacks great speed and acceleration. He expressed serious interest in visiting Michigan, but it’s always a battle to get kids out of the deep south.

Houston (TX) Cypress Falls defensive tackle Du’Vonta Lampkin decommitted from Oklahoma. He says the Sooners are still the team to beat, but he wants to take other visits, so he can’t say he’s “committed.” He’s a 6’3″, 306-pounder who’s a 247 Composite 3-star, the #21 defensive tackle, and #304 overall. He entered high school as a starting wide receiver but was so tough and physical that he started playing defensive end, after which he bulked up by eating a lot and taking a bunch of protein.

ADDED TO THE BOARD: 2016
Washington (DC) Archbishop Carroll offensive guard Richard Merritt was offered by Michigan. He’s a 6’5″, 320 lb. prospect with offers from Alabama, Auburn, Florida, Florida State, Miami, and Virginia Tech, among others. He played at Friendship Collegiate Academy the past couple seasons, but he transferred to Archbishop Carroll, where he’s teammates with 2016 Michigan offeree Jauan Williams. Merritt has very good size and could play tackle or guard at the next level. His father is 6’11”, so he may still have some growing to do.

Ocala (FL) Trinity Catholic defensive end Jordan Woods was offered by Michigan. He’s a 6’3″, 235 lb. prospect with offers from Florida, Florida State, Georgia, Miami, and South Carolina, among others. He’s a 247 Sports 4-star, the #10 strongside end, and #214 overall for his class. His three Crystal Ball predictions right now are for Florida.

OFF THE BOARD
See that Shane Lemieux guy up there that Michigan offered last week? He committed to Oregon.

MISCELLANEOUS
Last week on Recruiting Season, I profiled Chippewa Valley’s Stefan Claiborne, Wyandotte Roosevelt’s Donnie Corley, Muskegon’s Juanye Johnson, East English Village’s Emani Mason, and Westland John Glenn’s DeShawn Baker-Williams. Claiborne, Corley, and Johnson are some of the best the state has to offer in 2016, while Mason is likely one of the top few prospects for 2017. Baker-Williams is a rising senior starting to gain some steam.

No offer has been reported yet, but Bloomfield Hills (MI) Brother Rice quarterback Alex Malzone was supposed to visit Michigan this weekend after throwing for offensive coordinator Doug Nussmeier last week. Perhaps an offer is on its way.

Meanwhile, Newhall (CA) Hart quarterback Brady White committed to Arizona State. Nussmeier also watched him throw, so he appears to be off the table. Phoenix (AZ) Pinnacle quarterback Brian Lewerke, another potential target, committed to Michigan State last week, so the Wolverines are starting to see the dominoes fall.

Here’s a list of whom the coaches visited in April (LINK) and now a working list of the coaching visits for May (LINK).